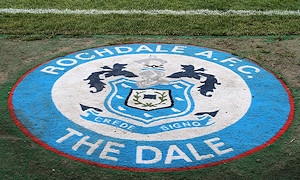 Rochdale AFC has donated two tickets to Rochdale Online to give to a reader for their home game against Bradford on Saturday 29 December 2018.

Rochdale travelled to Valley Parade in October to play Bradford and came away with three points from that game thanks to two penalties scored by Ian Henderson.

Henderson was tripped inside the box but dusted himself down to send Richard O’Donnell the wrong way with seven minutes left to play. Stephen Dooley then drew a foul from O’Donnell after the Irishman picked up on a short back pass from Lewis O’Brien; Henderson opting for the opposite corner, but the result was the same.

Closing date for this competition was midnight on 19 December 2018.