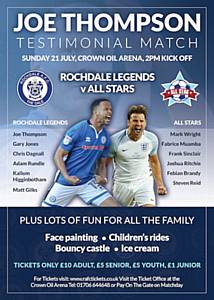 Rochdale Online has two tickets to give away to one of our readers.

Thompson, a two-time cancer survivor, retired in February this year, at the age of 29, on the advice of doctors following the physical effects of intensive treatment.

Some of the proceeds will be donated by Joe to The Christie Hospital, who ‘saved his life twice’ during his battles with cancer.

The Rochdale XI will include ex-Rochdale captain Gary Jones and Chris Dagnall with Fabrice Muamba (Bolton Wanderers), Mark Wright (The Only Way is Essex) and Joshua Ritchie (Love Island) playing for the Celeb XI.

Joe will also be holding a signing session in the Ratcliffe Bars at the ground between 11.30am and 12pm.

The day will be full of surprises and celebrations with fair rides, face painting and fun for all the family.

To enter answer the question below.

Closing date for this competition was midnight on 17 July 2019.