You are Here: Home » Events

Dracula: One Bloody Fang After Another 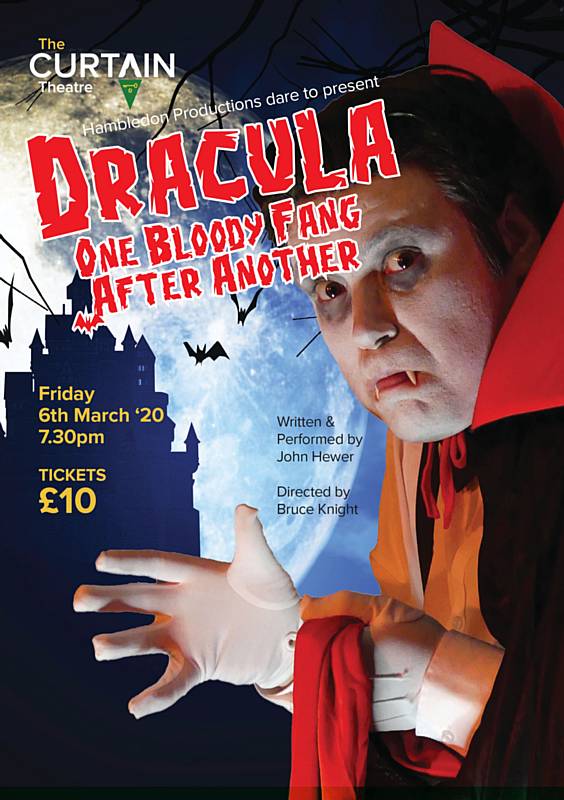 Over 100 years since Bram Stoker’s immortal, bloodcurdling novel was published, a new, affectionate lampooning of the Gothic classic is set to delight audiences as it embarks on a nationwide tour.

Riding on the success of recent smash-hits 'Just Like That! The Tommy Cooper Show' and 'Steptoe and Son', this new comedy from Hambledon Productions reimagines Stoker’s 1897 masterpiece, with high comedy, physical humour and clever wordplay.

John Hewer, who wrote the script and performs an impeccable feat by bringing an impressive 18 characters to life, is behind the production. He said: “I grew up appreciating comedians and comedy actors from a bygone era, the likes of Tommy Cooper, Ronnie Barker and Morecambe and Wise. None of them, however, tackled Dracula to any great length. I consider it a subject ripe for ribbing.

"Stoker’s novel is still terrifying, still gripping, whereas the various permutations in film, stage and television, largely, haven’t aged as well. Comedy and horror are much of the same; both thrive on surprise elements, mistaken identity, chases and near-death-experiences. I’ve so enjoyed sending up the genre and Victoriana, but have painstakingly (pun intended) stuck close to the original story and Stoker’s iconic characters.”

Tickets for this production are available from the link below or by contacting The Curtain Theatre.

Promote your event for free in our comprehensive event section... Submit Now

Note:
While every care is taken in the compilation of our events section to ensure accuracy, Rochdale Online cannot guarantee that information has not changed since entry, nor can Rochdale Online be held responsible for errors contained herein. Please contact forms@rochdaleonline.co.uk to report any erroneous information.