Businesses get on board with tram extension plan 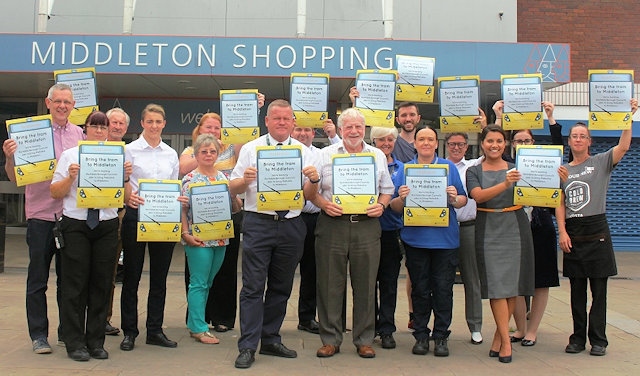 Councillor Phil Burke, a Middleton councillor and the council’s transport spokesman, with Councillor Allen Brett, leader of the council, and local businesses and supporters

Businesses in Middleton are backing the plan to bring Metrolink to the town.

Outlets from the shopping centre and nearby businesses have said they support the proposal to create a new route from Middleton to the Bury to Manchester line. The new line would include a new major park and ride scheme to alleviate commuter traffic travelling south into the city and serve the growing population of Middleton and its surrounding areas, which are seen as important future growth areas.

The plans are supported by Transport for Greater Manchester (TfGM), who said that the proposal made economic sense.

Lynette Howgate, an associate director of Middleton Shopping Centre, said: “We have a really good town centre with lots of good businesses but we are poorly served by public transport links. Bringing the tram into Middleton would bring lots of new jobs with it and also lots of new opportunities for the town, its businesses and its people.”

Tony Nugent, who has run a vehicle leasing company in Middleton for 25 years, said: “I was born and brought up in Alkrington so I know the town very well and know how a tram link would really help unlock some of the great potential for growth Middleton has. The tram has been really great for Rochdale and I’m sure it would be really great for Middleton.”

Councillor Phil Burke, a Middleton councillor and the council’s transport spokesman, said: “Financially and economically it makes sense. We have always missed out on public transport opportunities so we need to really give this a big push. It would give the town and its people such a big boost.”

The show of support from Middleton businesses comes after the leader of the council, Councillor Allen Brett, and Liz McInnes MP wrote to the Mayor of Greater Manchester to ask him to back the plan.