You are Here: Home » News » Business News » Greenwoods menswear closes as company is placed into ‘liquidation’

Greenwoods menswear closes as company is placed into ‘liquidation’ 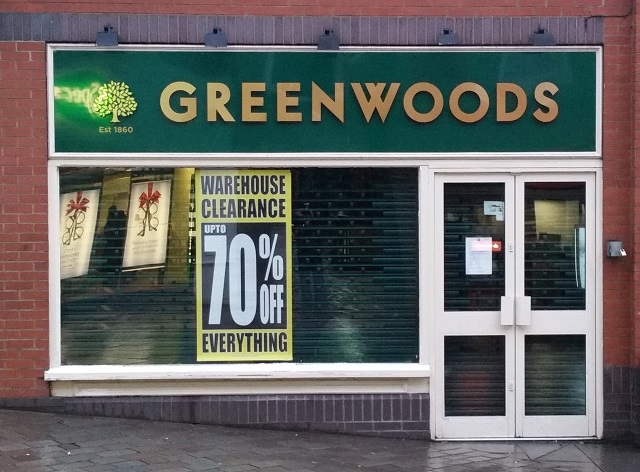 Greenwoods has closed just weeks after returning to the high street

Menswear retailer Greenwoods has closed its doors in Rochdale centre just weeks after a welcome return to the high street, as the company appears to have gone into liquidation.

Rochdale’s store, managed by previous members of staff, returned to its former premises in October 2018, and was warmly welcomed back by shoppers, Town Centre Manager, Paul Ambrose, and Wheatsheaf Centre Manager, Mark Foxley.

The local Greenwoods store in the Wheatsheaf Shopping Centre closed in August 2013, with the firm going into administration in September 2017, closing over 60 stores nationwide.

Over 30 stores did reopen across the UK – mostly in towns it had left – after the company was sold to Versatile International Trading last year.

However, a notice in the window of several stores, such as Rochdale and Huddersfield, states that all Greenwoods stores have closed for business permanently after Versatile was placed into a Creditors Voluntary Liquidation.

Greenwoods was established in 1860, having originally opened as a hat shop in Bradford.

A retail company called Versatile International Trading Limited, based in Stockport, is still listed as ‘active’ on Companies House.

Mark Foxley, Wheatsheaf Centre Manager, said: “We are disappointed with the Greenwoods CVL notice, particularly as by all accounts the new Rochdale branch was one of the better performing stores.

"We are in discussions with a number of prospective tenants for the Wheatsheaf, offering good incentives alongside the council's support for new businesses, I don’t think it will be too long before we welcome a new tenant to that unit.

“I have confidence in both the Wheatsheaf and Rochdale town centre, and am keen to see more leisure, residential and community use in the future.”