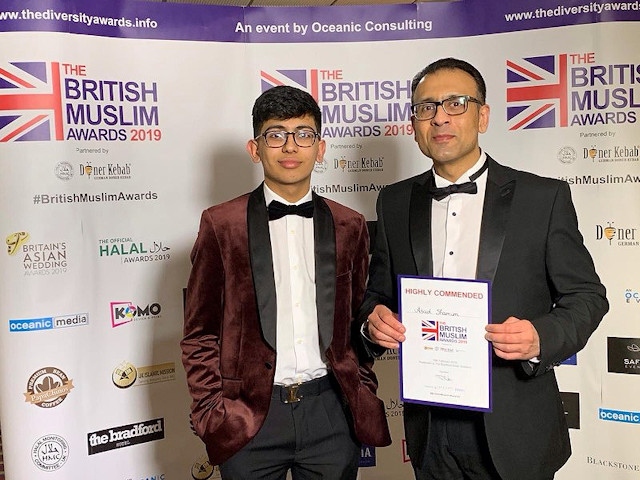 Asad Shamim with his son, Hammad

Mr Shamim, of Rochdale, CEO of Furniture in Fashion, one of the largest online furniture stores in the UK, was named as one of 300 finalists, after being shortlisted in the Business Leader category.

The seventh British Muslim Awards were held at The Bradford Hotel on Tuesday (19 February) in Bradford, where some of the most accomplished and influential individuals gathered for a glamorous night to celebrate their success.

Mr Shamim said: “I feel proud of everything I have achieved in life and am very privileged to be in a position to be able to help those in need together with those who are underprivileged.

“As well as running a successful online business, I strongly believe in the philosophy of helping others out in order to facilitate them to achieve success.

“I believe in the idea of volunteerism, philanthropy and actively participating in the promotion of the community.

Mr Shamim has also built up his own independent consultancy service which helps assist companies that are in financial distress, and is a senior advisory board member for a UK law firm.

He continued: “My key role is building and maintaining important public relations role within the organisation and responsibility for implementing fundamental business development strategies, broadening an understanding of the business market and industry trends.

“My advice to others would be never give up on your goals and dreams. With hard work and persistence, you can achieve absolutely anything.”

The British Muslim Awards recognise a wide range of achievements from outstanding individuals across the UK who positively impact business, charity, sport, arts, culture, religious advocacy, education and medicine among others, while simultaneously and unknowingly battle negative stereotypes.