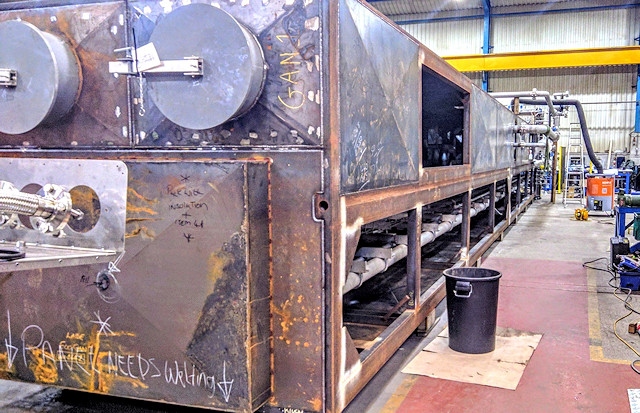 Gilwood Fabricators in Heywood completed their first double column cryogenic distillation system which shipped out to Sheffield on Friday (22 March).

The 20-tonne, 20-metre-long cryogenic distillation system, also known as a ‘coldbox’, is used to separate and purify air into nitrogen. The basic process is to cool air to extremely low temperatures of around -194°C and distil it into oxygen, nitrogen and argon.

Joint Managing Director, Matt Gilmartin said: “This is one of the largest systems we have built in the 55 years we have been in business. The unit was so large we needed to skate the coldbox out of the workshop using a diesel FLT for propulsion and used two external cranes to load it onto transport.

“We started building the double column in June last year and then won the work to build the system around it in October. From the outside it just looks like a large box but inside is a labyrinth of pipework interconnecting columns, heat exchangers, valves and instruments.”

A massive amount of work has gone into the £200,000 project so far, taking about 32 weeks to get to this stage

After the system is painted in Sheffield, it will be delivered to the client, Linde, for factory testing.

Once the testing is complete the system will ultimately be owned BOC Gases and installed to generate nitrogen onsite at Bausch & Lomb in Ireland.

Matt added: “We are now looking into the feasibility of building even larger cryogenic distillation systems as this next generation of coldbox is a popular replacement for older less economic systems all over the world.”

Peter Gilmartin, former Managing Director of the company, added: “This is a very brilliant achievement for the company; well done to everyone involved.”

Gilwood Fabricators in Heywood was set up in 1964 by Luke Gilmartin and his partner, Mr Heywood, to service the textile industry.

As the textile industry declined, Gilwoods had to expand, and did so – into the stainless-steel fabrication sector.

If you're looking for new staff, you can advertise a job vacancy with us for 30 days for just £75 +VAT. Use our online form to create your ad.
Win tickets to The Gin Society Festival