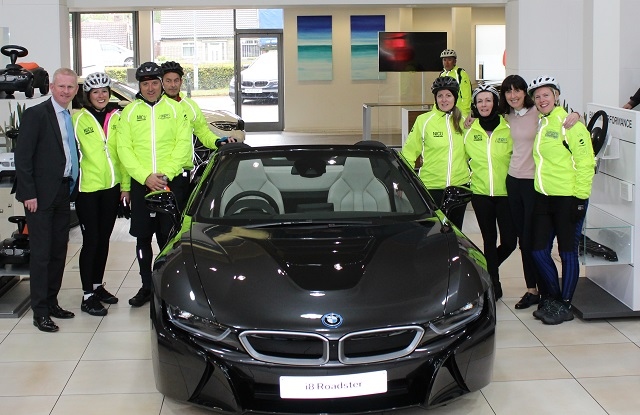 Heidi’s Challenge, a coast-to-coast charity bike challenge, chose Williams BMW Rochdale to be a stop off point for a three-day ride which saw 20 participants cycle from Liverpool city centre to Bridlington in support of the charity, Neonatal Intensive Care Unit (NICU) Support.

BMW is one of the key sponsors of the challenge and had donated vehicles to assist with carrying essential equipment for the riders from 7- 9 May.

The riders stopped off at Williams BMW Rochdale on Wednesday 8 May, and included Lady Sarra Kemp, the wife of Olympic and World Champion gold medal cyclist, Sir Chris Hoy MBE, who became a trustee of the NICU Support charity after the premature birth of their son, Callum, at just 29 weeks.

NICU Support is a bespoke charity whose role is the collection and delivery of essential lifesaving donor breast milk from volunteer mothers for sick and premature babies. The charity recently set up a new service that transports mums into NICU to enable them to spend as much time as possible with their babies whilst in hospital.

Heidi Loughlin is familiar with the charity’s work having used the service after giving birth prematurely. Now a trustee of NICU Support, Heidi first cycled coast-to-coast in 2018 with the race being arranged in her honour after being diagnosed with stage 4 incurable cancer. Heidi, who set up the blog Storm in a Tit Cup after her cancer diagnosis, is also promoting a book about her life experiences with the mention of losing her daughter Ally at just eight days old.

Guy Adams, Managing Director of Williams Group, said: “It’s a privilege to be involved with such a fantastic charity and be able to help their cause by donating support vehicles. The work of NICU Support is essential and Williams BMW is proud to support their endeavours.”