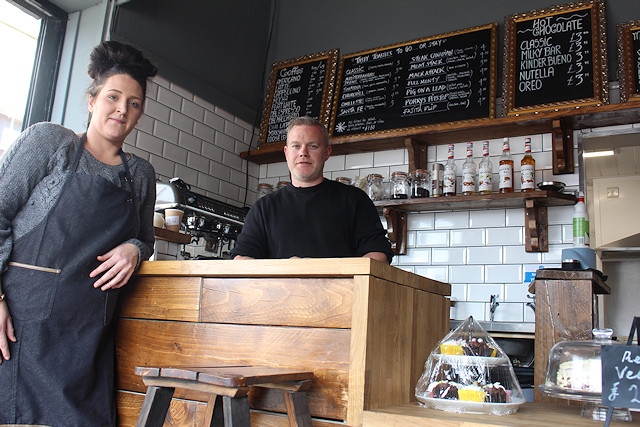 L-R: Roasted and Toasted manager Jerry Radcliffe, who is a partner in the business, with Jason McGuire

The coffee connoisseur behind the Manchester Coffee company is full of beans after opening his latest venture in Rochdale town centre.

Jason McGuire has just opened Roasted and Toasted at number 1 the Butts - next to the Regal Moon - with his business partners Jerry and Neil Radcliffe, supported by Rochdale Borough Council’s small business support package.

The businessman is hoping Rochdale’s visitors will get a taste for his special blend coffee, which he makes using his own recipe and beans which he sources direct through the London Stock Exchange. The café also serves up a range of toasties, and plans are afoot to get a late license and serve alcohol.

Jason, who also runs the Art Café in Rochdale's Touchstones Museum, said: “I was given the opportunity to open a new place in Rochdale, and I jumped at it. The area around here, with the re-opened river and market and new bars like the Medicine Tap, is really thriving and becoming a mini food quarter.

“This area is a lot like the Northern Quarter was when it first started out and it’s really exciting being here, as everything is changing and getting better. The numbers also stack up here. It costs a fraction of what it would to open up in Manchester city centre and the council supported us with a grant and rates support.”

Jason has spent around £50,000 repurposing the building, including exposing and treating the brickwork.