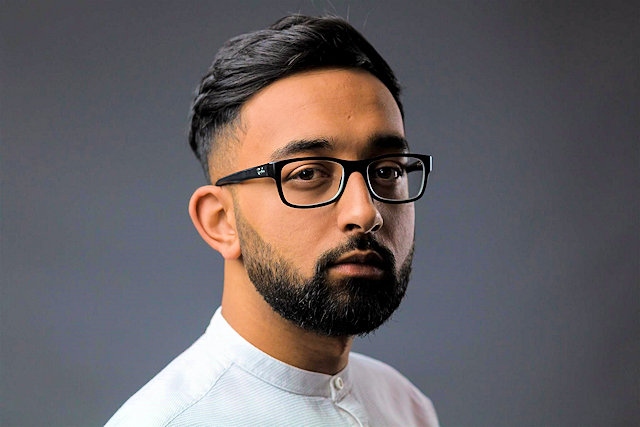 Hassan Iqbal, from Rochdale shortlisted as a finalist in the 2019 E3 Business Awards

Young entrepreneur Hassan Iqbal, 21, from Rochdale who started his first business at 13, has been shortlisted as a finalist in the 2019 E3 Business Awards, which will be held at the University of Bolton Stadium on Thursday 11 July 2019.

Hassan runs CreativePixels, a creative agency based in Central Manchester which supports businesses across the globe with bespoke website design and branding. He was selected from amongst scores of nominees to become one of the finalists for the prestigious Young Entrepreneur of the Year category.

Hassan recently appeared on BBC Radio talking about his work which helped UNICEF to raise £500,000 to support young people from disadvantaged backgrounds. He has worked with the High Sheriff of Manchester to improve young people’s outcomes, as well as contributing to the Institute of Directors board for the Manchester region to increase the uptake of young people in entrepreneurship as the Young Leaders & Directors Ambassador.

Hassan is a graduate from the Peter Jones Enterprise Academy launched by Dragon’s Den panellist and investor Peter Jones CBE, and he graduated with a degree from Manchester Metropolitan University only last July.

Reacting to the announcement, Hassan said: “I’m really honoured to have become a finalist for the E3 Awards, it’s a great recognition to the work I and the people around me have done, The past 12 months have been great for myself and CreativePixels - with even greater clients and for getting involved with things such as the IoD and High Sherriff of Manchester.

“I still believe there’s a lot I can do. I hope to get involved in more opportunities and initiatives which support and raise the voice of young people in business. In the current climate we’re in, young people’s voices and young entrepreneurship is needed more than ever. I’ve been lucky to have received a lot of support from several organisations and I want to make sure that other young people get the same support I did, as I know first-hand how much of a positive impact it can have on their future.”

Mubarak Chati, managing director of 1 Events Media, which hosts the E3 Awards said: "I’d like to congratulate Hassan. We get hundreds of very compelling nominations every year, so to be named a finalist is a genuine achievement in itself.

"I say that partly because I know how rigorous the judges are when they make their shortlist selections. We have worked very hard to create a judging process that is fair, transparent and clearly defined, so finalists can feel proud that they really earned their place at the awards evening. To get here, Hassan and the other finalists have shown that they are amongst the best, most dynamic businesses people in the whole of the North West."

Hassan Iqbal went to Oulder Hill Community School in Rochdale, and following his GCSE results went to the Peter Jones Academy in Oldham (set up by Peter Jones CBE, entrepreneur and star of Dragons’ Den).