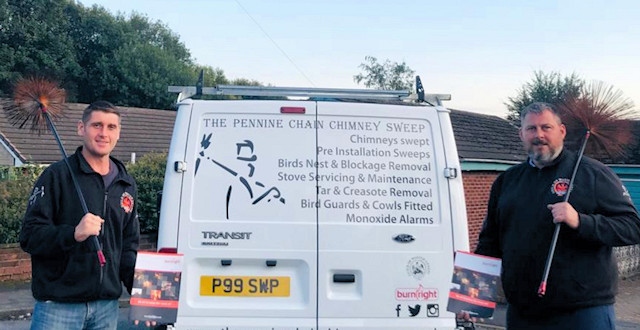 The Pennine Chain Chimney Sweep has signed up to the ‘BurnRight’ campaign, formulated by chimney sweeps and professionals in the solid fuel industry in an effort to educate people on how to use their woodburners and multi fuel stoves correctly.

If not properly operated, appliances can not only pollute the atmosphere, but also pose a risk to life and property.

The campaign was launched in April 2018 by the Guild of Master Chimney Sweeps.

Lee Wilkinson, of The Pennine Chain Chimney Sweep, said: “The BurnRight campaign has come at a critical time, as the government is looking closely at emissions from domestic fires.

“The root of the problem is that the wood is often not burned at a high enough temperature. If it’s not hot enough then unburned fuel vapours travel up and out of the chimney causing unnecessary pollution.

“There is a real lack of awareness with some of these issues and most people who use a stove don’t even know there is a problem, let alone think that they might be a part of it.

“The design of the stove and the moisture content of the wood are two factors that affect the burning temperature, but the most important thing is the way the user controls the air supply to the stove. Basically, if the air supply is closed off too much, the wood can’t burn hot enough. Closing the air off too much does not save fuel, it wastes fuel.”

“BurnRight seeks to help people who use stoves to get it right and make a difference to the air quality where they live. Not only is this good news for the environment, but users will save money, their chimney will be cleaner - and therefore safer - and the chimney and the stove will last longer too.

“The campaign is being spearheaded by professional chimney sweeps across the country, and I’m pleased to be one of them. We have a unique perspective of the stove, the fuel, the chimney and the customers burning habits, and can advise accordingly.”