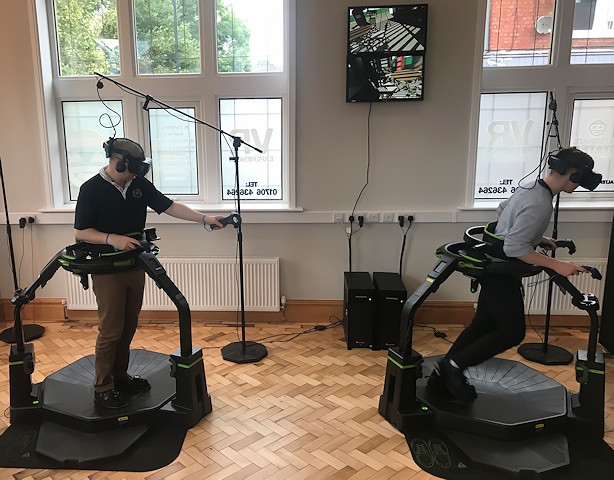 Castleton-based Virtual Reality (VR) Development and Experience Studio Alternate States is offering a bespoke service to architects, letting them physically walk around the properties they design at any stage in the design and construction process.

The new service uses the studio’s 360 degree VR walking platform to let users physically move through a virtual world. These virtual walk-throughs give architects a better understanding of the spaces their designs create, and a much truer picture of size, scale and accessibility than traditional static 3D walk-throughs allow.

In another unique twist, the VR walking platforms can be linked together to let several people walk through a virtual building at the same time, so architects are able to invite customers, planning officers, interior designers and other interested parties to tour a design together, pointing out interesting features or potential bottlenecks.

Alternate State founder Jake White said: “We were approached by a local architect firm who had read about Alternate States and the unique experiences we offer, and who could see the benefits of being able to physically walk around a space while still at design stage. We went away and researched it and realised that we could offer something new and potentially game changing for architects, designers and builders.”

He continues: “The 360 degree VR walking platform was originally designed for the public to experience VR but this is a new avenue for us, a world first solution and one with a huge number of potential applications.”

Those applications include touring buildings that already exist, but where access is restricted due to safety or security concerns, or where it is simply more convenient to tour the property virtually (such as customers looking for a manufacturing facility).

A 3D recording of a building interior or a building site update, synced with a VR station, lets participants tour the building from the comfort of their own offices in a wholly realistic way. Alternate States can also take the necessary equipment to clients whenever necessary.

Other applications include selling off plan. For example, potential clients/buyers will be able to walk around their apartment, house, office or commercial unit before it has been built, ultimately allowing them to visualise the space and features in advance.

“This is a really exciting venture for us because it shows the power and versatility of this technology.” says Jake. “We’re the only VR Development and Experience Studio in the north of England with this kind of equipment, and we’re only beginning to find out all the ways it can be used.”

Alternate States opened its doors to the public on 8 April at the old library building in Castleton. It is a unique VR development and experience studio helping to revolutionise the way organisations interact with customers and clients.