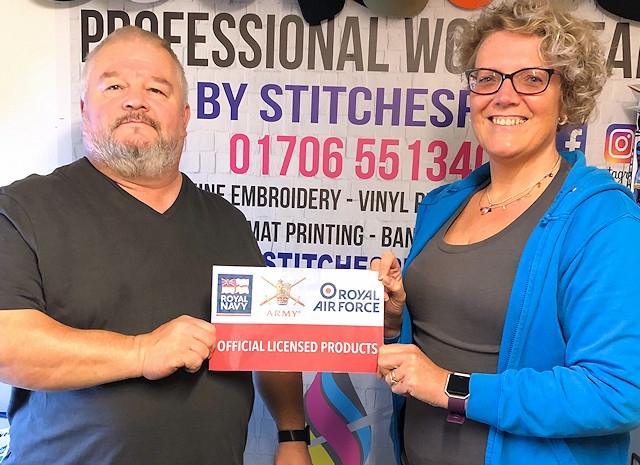 A Milnrow embroidery company has been licensed to use Ministry of Defence logos on its apparel.

One of this year’s Rochdale 30, Stitchesrus, run by married couple Angela and Nigel Cullen, was recently approved at the start of November to provide official logos across a range of clothing and accessories, including the Armed Forces, Royal Air Force and the Royal Navy.

Stitchesrus began with one embroidery machine out of Angela’s home in 2011 after she began caring for her mother.

After demand for her embroidered items grew, the business moved to a mill in Mossley, with a second embroidery machine.

In 2014, Stitchesrus again moved, this time into the Albert Mill in Milnrow, where the company now boasts a vast quantity of specialist equipment, including five six-needle embroidery machines, one 10 needle embroider, a vinyl cutter, a large format printer, a heat press, a cutting press and a laser engraver.

Whilst they do not supply uniforms to the Ministry of Defence (MOD), being licenced to use the MOD logos means that Angela and Nigel have access to a vast library of logos, which can all be applied to various apparel for serving members and veterans.

Stitchesrus also caters for the workplace as well as bespoke products for individuals and has shipped products worldwide from Australia to the United States of America.

The husband and wife team also hope to set up a new website especially for their military goods, with a small portion of the profits being donated to a local charity.