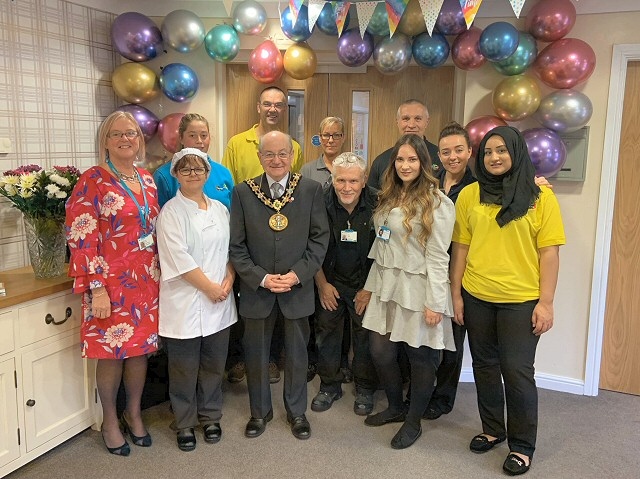 The 20th anniversary of the founding of Exemplar Health Care was celebrated in style at Thames House, Rochdale, on the 5 November with a visit from the Mayor of Rochdale, Billy Sheerin.

The mayor was invited to cut the ribbon to officially open the newly refurbished dining room which is themed as an American diner, fully designed and chosen by service users.

Thames House is a nursing care home for adults with neuro-disabilities, mental health conditions, brain and spinal injury, and stroke.

Ambreen Akhtar from Thames House said: “Our home manager, Mrs Dawn Moran, along with staff and service users were delighted to receive the mayor into the home.

“The mayor was taken on a tour of our home and shown the Dignity Tree which he was really impressed with, and the Values Board, our Success Board which displays the awards and prizes won by staff and service users over several years. We also spoke to him about the Palliative Care Passport training that 22 staff members from Thames House attended and he met nurse Faye Hobson who was awarded the Dignity Award from Springhill Hospice.

“Staff and service users introduced themselves to the mayor and told him all about life at Thames.

“After the tour there was a birthday cake and everyone sang happy birthday, the mayor added a solo which was lovely and after blowing out the candles he then did the ceremonial cutting of the cake.

“A well-deserved cup of tea was appreciated by the mayor and following the buffet there was a values presentation which was won by Marie Hartley (HCA).

"The day continued with an afternoon of singing and dancing in the company of fabulous singers, Adam and Lisa."