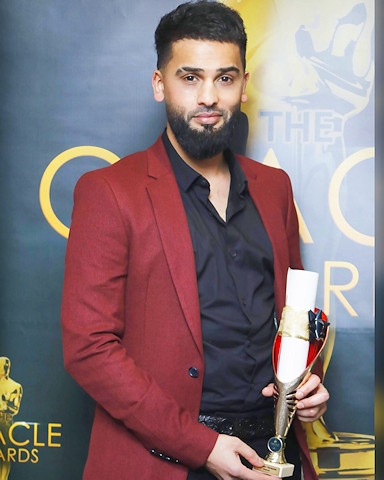 Mohammed Ilmaas with his award

Following last year’s success at the Oracle Awards, Rochdale hair stylist Mohammed Ilmaas has been named as the best male hairstylist for the third year running.

Mr Ilmaas won the best male hairstylist at the Oracle Awards on Saturday 23 November, retaining the title after he was previously awarded it in 2018 and 2017.

Mr Ilmaas opened his unisex hair salon, Hair by Ilmaas, in Rochdale three years ago. He has over 12 years of experience in the industry and his passion has led him to be an award-winning and published hairstylist.

He said: “It meant a huge deal to me to win the award, I really felt like all my hard work had paid off and that I was voted for by all my lovely clients and followers.”

Mr Ilmaas shared a few words about how he started out his career at the age of 19.

He continued: “I worked at a salon for a year at 19. Then I started freelancing as my own brand name from 21. It was only until six years ago that I decided to really push my brand in the Western fashion industry and media.

“Since this day I have been doing photo-shoots and campaigns which I have directed and created by myself covering all genres, ethnic backgrounds and cultures for my clients worldwide”.

In 2018, Mr Ilmaas also won the best hairstylist award at the Fashion and Beauty awards in Manchester.

Taking place in West Yorkshire, the Oracle Awards are peer-voted and judged by an independent panel of specialists along with a voting system.

The awards were launched to raise standards across the industry by showcasing top class and innovation.