Business confidence across the North West lowest for a decade 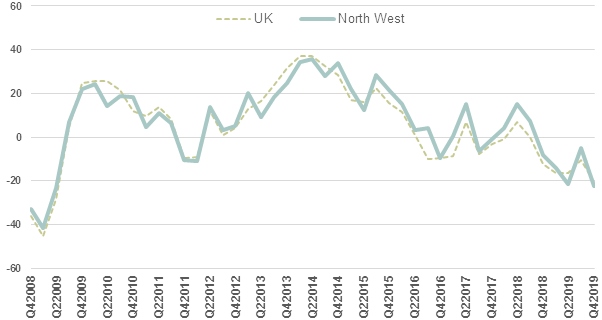 Business confidence trend: North West as measured by ICAEW since 2008

Business confidence across the North West is at its lowest level for the past decade, a new report published by chartered accountancy body ICAEW shows.

Confidence among companies is at -22.4 in the fourth quarter of 2019, according to ICAEW’s Business Confidence Monitor™ report for the North West. This is the lowest seen since the second quarter of 2009 and is lower than the national UK level which sits at -20.6.

Ongoing Brexit uncertainty and political instability is casting a shadow over businesses in the region. Meanwhile, customer demand is a growing challenge for 38% of businesses, up from 30% a year ago. Rising costs combined with weaker domestic sales performance are also negatively affecting business confidence.

Businesses in the North West also report that they expect domestic sales and exports to slow, and employment is also predicted to rise by just 0.8%.

Melanie Christie, ICAEW Director of Regions, said: “Business confidence in the North West has fallen to a ten-year low, likely driven by Brexit and political uncertainty. We hope that the new Government will ease the strain on businesses and bring some much-needed stability to the economy.”