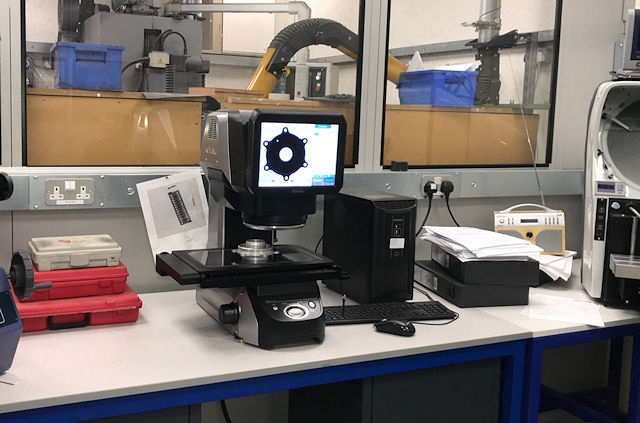 NEMA Ltd purchased the IM Series Image Dimension Measurement System from KEYENCE - selected because of its range of specialist measurement tools, its built-in dimensional reporting feature and its speed of measurement, amongst other criteria.

These features all play a role in NEMA’s design, development and repair of Electric Motors and Electro-Mechanical Assemblies for companies such as UTC Aerospace, BAE Systems and Airbus.

Andrew Wilding, Managing Director of NEMA, said: “Aiming for, and indeed maintaining, the highest possible standards is an absolute necessity for us.

“We were committed to investing heavily in our inspection facilities, and we had already identified areas where we felt improvements could be made.

“With new equipment and a controlled environment, we felt the IM Series by KEYENCE was a key device for us to acquire, and it has proved essential to us in our efforts to continue to satisfy our varied customer base, which includes various Tier 1 aerospace companies.”

Originally formed in 1954 under the name of The Nordale Spring Company, NEMA has a long expertise with supplying a variety of markets – including the aerospace, defence, marine and high voltage switchgear sectors.

In the early nineties the company gained an ISO 9001 accredited certification, which it continues to hold to this day. At the turn of the millennium, the company engaged a team of highly experienced engineers to develop and implement the successful manufacturing of a wide range of electric actuation products, specifically for the aerospace industry.

In order to better reflect the change to its core business, the name of the company was then changed to NEMA (Nordale Electro-Mechanical Actuation).

NEMA also pursued aerospace standards and in 2005 the company achieved an AS 9100 accreditation for the manufacture of electric motors, electro-mechanical assemblies and components. This accreditation also included the springs and pressings facility.