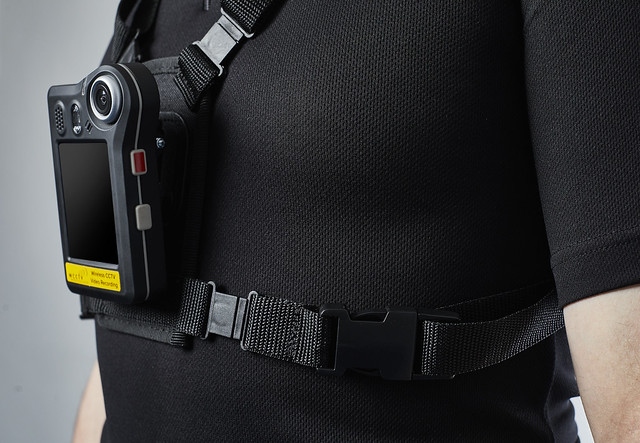 The body-worn cameras, which are used by traffic wardens, retail security guards and other frontline staff

A surge in demand for body-worn cameras is being credited as the reason for record turnover at an award-winning Rochdale manufacturer.

The company, which has tripled the size of its workforce in three years to 82, has also seen its turnover treble in size since 2013 to £12.5m.

Demand for its rapid deployment CCTV towers and 4G HD dome cameras has also soared with 95 per cent of local authorities in the UK using their products, alongside construction companies, police forces, retailers, and Network Rail.

David Gilbertson, CEO and co-founder, predicted significant growth in demand for the body-worn cameras, which are already been used by traffic wardens, retail security guards and other frontline staff.

Evidence collected by one of their cameras was recently used to help convict a motorist who threatened a traffic warden in Sheffield.

Images and audio collected by the body-worn cameras can be viewed in real-time by staff in a control room.

Gilbertson said: "We've sold 4,000 body cameras already, including to a number of big retailers, and we see it getting to the point where anybody dealing with a member of public will have a body camera.

"As well as providing reassurance to the user it also acts as a major deterrent to an aggressor. The arrival of 5G technology will see it grow even further because it will improve the coverage.

"We're hoping to work with a lot more UK police forces and other emergency services personnel going forward and as the manufacturer and supplier we can provide the exact solution to the customer's problem."

Gilbertson co-founded WCCTV in 2001 alongside current chairman Tim Williams in 2001 and it has grown to become the UK's leading manufacturer of deployable CCTV.

The duo predicted the growth of the phone network would make it easier to transmit video.

"If someone approaches one of our yellow rapid deployment CCTV towers on site an alarm gets sent back to the remote-control room, which can then issue an audio challenge. If that doesn't scare people away, which it does in many circumstances, they can then escalate to a law enforcement agency or a key-holding service."

The yellow towers are protected by four infrared cameras that have a range of 250 metres and record video evidence.

The 4G HD dome technology is especially popular with local authorities and can be fixed to lampposts and walls to monitor everything from anti-social behaviour, fly-tipping hotspots and new road layouts.

WCCTV’s award-winning products have been credited with preventing 315 attempted break-ins between September 2018 and July 2019.

The company opened an office in the US three years ago. Gilbertson said: "The US is a big country with a major economy. They face similar scenarios as the UK with lots of remote areas requiring CCTV with very good mobile coverage."

The CEO said the business was committed to Rochdale and its head office in Kingsway Business Park.

"We've got a great relationship with Rochdale Council and the Rochdale Development Agency and being here is good for our business," said Gilbertson. "We've also got a great transport network on our doorstep."

Last month, WCCTV was one of the winners at the 2019 Rochdale Business Awards, taking home two awards for Business of the Year (£5m+ turnover) and for Skills, Education and Training Provider of the Year.