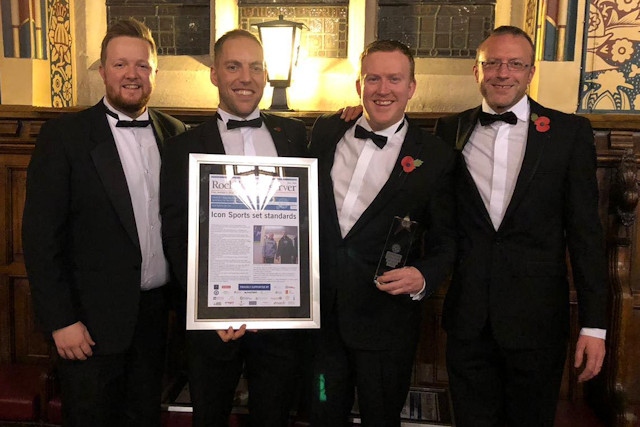 ICON Sports, named Business of Year (turnover under £1m) at the 2018 Rochdale Business Awards, do not qualify for business rates grant support

UK small businesses which occupy serviced office space have missed out on £100m worth of relief, which – at £10,000 per business – could have been a lifesaver for many.

In simple terms, companies which do not have a business rates account with their local authority get nothing. The loophole means if a business occupies serviced office space where rates are included (bundled into the serviced package and paid via the landlord), it is not eligible for the support.

Greg Tattersall from ICON Sports, named Business of Year (turnover under £1m) at the 2018 Rochdale Business Awards, told Rochdale Online that the terms of the lease at their premises will see them miss out.

He said: “ICON Sports UK has been closed now for almost five weeks, with all staff placed on furlough. This is normally our busiest time of the year ahead of the cricket season. Prior to closing, we had a lot of orders cancelled by businesses large and small, who were all worried what the future might hold.

“The current Coronavirus Job Retention Scheme has had the desired effect and we have ensured our staff are all retained but the grant would enable us to ensure all staff can return to their roles at the earliest opportunity.

“It’s tough: on paper, two businesses can appear very similar. One business has its own premises and will receive the Government Grant. Businesses like ours, who pay their rates via the landlord receive nothing. We understand that the chancellor had to move incredibly quickly to implement the Small Businesses Grant Funding scheme, but you cannot expect to get it right first time and a re-assessment is required. Now the true extent of the situation has come to light, there should be some adjustments made on the government’s part to ensure all businesses have fair access to this lifeline.

“ICON Sports UK has been operating for nearly five years now and have some fantastic staff, supportive suppliers and great customers. However, like most businesses, an empty workbook is a possibility the longer this goes on for.

“We are trying to remain positive and feel it’ll be a chance to start a fresh in some aspects, from creating new opportunities with different businesses or customers too, whilst continuing to be able to develop our good work in the community.”

Rochdale Council has already processed £30m of grant funding to eligible businesses, and officers are keen to talk to the qualifying businesses which have not made a claim:

Councillor Allen Brett, leader of the council and cabinet member for finance, said: “We know how anxious businesses will be and many will feel that they’re in a fight to survive at the moment, so we’re doing everything we can to help. Making sure they get this vital cash as soon as possible is one of the most important things we can do and I’m very proud of the way our teams have responded to this.

“Unfortunately, the government scheme does not allow us to pay grants to people who pay their rent and rates in one combined bill, such as people who are renting space in a building from a landlord.

“This is beyond our control, as it’s not our scheme, but we are actively lobbying government about this issue.”

"There's been a letter from Sir Richard Lees (leader of Manchester City Council and a Deputy Mayor of Greater Manchester) to government about this problem.

"We've also made direct contact about it. There needs to be some movement from central government on this so we're pressing hard to get to get some clarity on it and get a process that can work."

Louise Lyons is a photographer based in Milnrow, who has been affected by the loophole.

She said: “I’ve built up a successful studio for the last six years and I’ve been in my current one for four years.

"The £10,000 grant would secure the business and my premises. It would also mean I can pay other local businesses securing their livelihoods. In my unit alone, there are six other businesses who are in the same position."

Also affected is Peter Love, a director of APL Cleaning based in Littleborough.

He said: “My business has seen a drop in revenue of around 95% due to the Covid-19 virus. I currently employ 28 people, 25 of which have been furloughed. Most of the businesses we clean for are either closed because the supply chain is broken, or they are following the government advice and closing to protect their staff members. A grant would help us keep afloat during this difficult time. While we don’t directly pay business rates, we still have overheads, as most, if not all, businesses have.

“It is important to support businesses like mine because we provide employment to local people, which in turn helps the local area and economy. It’s a great feeling knowing that, because of my company, I have helped many staff members over the years improve their situation. This may be moving up the property ladder or buying a new bike for the kids etc.

“It would be sad to see my and other businesses disappear due to this situation after 16 years of trading.”

Local commercial property agent Steve Barton says that the businesses which do not pay rates directly to the local authority are being “unfairly excluded”.

He told us: “As a landlord and working with many landlords, we are aware of the inequality of the current system. These are businesses which contribute to the tax system that are being unfairly excluded from the grants available.”

Chris Fletcher Policy, Campaigns and Communications Director at Greater Manchester Chamber of Commerce, says it is looking to fix the issue, which is a problem across the UK.

Mr Fletcher said: “We are hearing from more businesses caught up in what seems a nightmare scenario where, because they don’t pay business rates direct to local authorities, they aren’t registered and so may well be missing out on grant funding they could be entitled to.

“In amongst many schemes launched by government to tackle the economic impact of Covid-19 there are a series of grants and reliefs available to businesses administered through the business rate system. In many cases local authorities have released grant monies directly into bank accounts using the rates system but obviously if a business isn’t on their radar screens then they won’t get anything.

“We are looking for a simple fix to this whereby businesses can register with local authorities and hopefully they can access funds they are eligible for.

“This is an issue across the UK and has been lobbied with senior government ministers directly.”