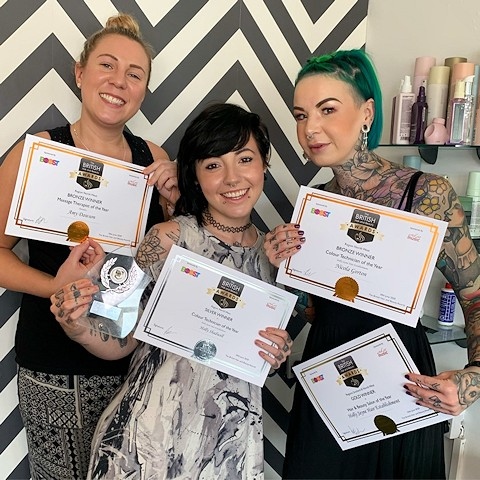 Amy Dawson, Holly Shadwell and Nic Gorton with their awards

Holly Jayne Hair Establishment in Heywood has scooped a number of awards at this year’s British Hair and Beauty Awards.

Holly said: “Coming back after lockdown as an award-winning salon was an absolute dream come true.

“I’m so unbelievably proud of my team for working so hard and having such incredible skills. They inspire me every single day and I’d be lost without them.  We encourage our clients and staff to be unapologetically “them” and always tailor treatments to create something unique for each person.

“Nothing is taboo in the salon as it should be a safe space for people to escape from real life. As well as creating beautiful hair and providing incredible beauty treatments, we want our clients to leave the salon feeling amazing on the inside as well as the outside.”

Holly opened Holly Jayne Hair Establishment in December 2017, after securing a host of qualifications from Bury College, including Level 2 and Level 3 Hairdressing and Level 2 Barbering.

During her time at Bury College, Holly claimed first place in the North West heat of the Blackpool International Competition, going on to win fourth place in the national finals.

She also took third place in the National Hairdressing Federation competition in the Warrington Bridal Style round, and was shortlisted for the Outstanding BTEC Student of the Year award.

Holly added: “The salon is going from strength to strength and I’m still in shock that we are officially the ‘best in the North West’. We are all so passionate and love our work; it is amazing to be recognised for this after only being open for two-and-a-half years.”

The British Hair and Beauty Awards were established in 2014 by online media marketing company Think Expose. The online awards are considered one of the most prestigious for the hair, beauty, nails and spa industry, recognising those who make a real difference.