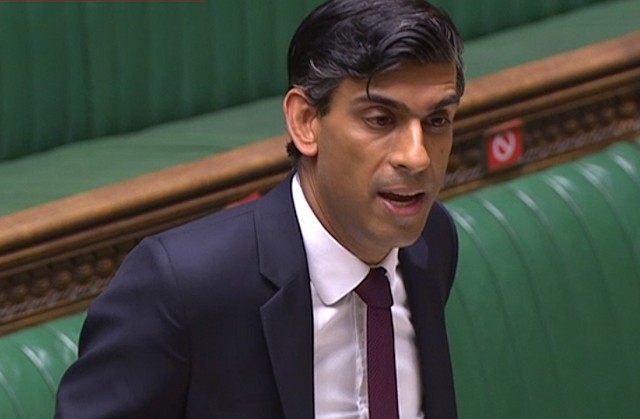 The Chancellor Rishi Sunak today outlined the government’s Winter Economy Plan (Thursday 24 September) to support businesses and jobs through the next stage of the coronavirus crisis.

The announcement comes after the Prime Minster set out further measures to combat the spread of the virus over the winter, while preserving the ability to grow the economy.

The Chancellor of the Exchequer Rishi Sunak said: "The resurgence of the virus, and the measures we need to take in response, pose a threat to our fragile economic recovery… Our approach to the next phase of support must be different to that which came before.

"The primary goal of our economic policy remains unchanged - to support people’s jobs - but the way we achieve that must evolve."

The package of measures in the Winter Economy Plan applies to all regions and nations of the UK.

The current furlough scheme ends on 31 October and a new Job Support Scheme will be introduced from 1 November. The new scheme aims to protect viable jobs in businesses who are facing lower demand over the winter months due to coronavirus.

In order to support only viable jobs, employees must be working at least 33% of their usual hours. The level of grant will be calculated based on an employee’s usual salary, capped at £697.92 per month.

Under the scheme, which will run for six months, the government will contribute towards the wages of employees who are working fewer than normal hours due to decreased demand. Employers will continue to pay the wages of staff for the hours they work - but for the hours not worked, the government and the employer will each pay one third of their equivalent salary. The employer and government contributions will result in employees receiving the equivalent of 77% of their usual salary. 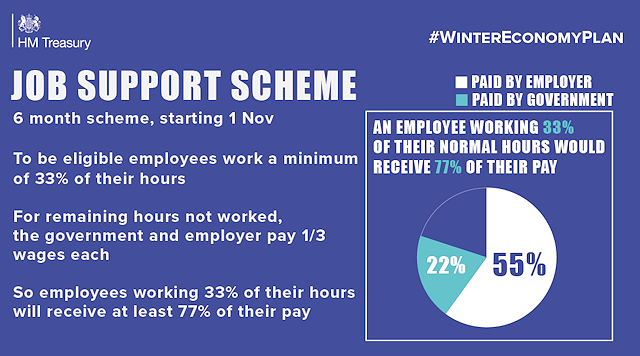 The Job Support Scheme will be open to businesses across the UK even if they have not previously used the furlough scheme.

The existing scheme to support the self employed will be extended to cover the period from November to the end of January 2021. Claims can be made for the value of 20% of a person’s average monthly profits (up to a total of £1,875) by people who are continuing to actively trade but face reduced demand due to coronavirus.

An additional second grant, which may be adjusted to respond to changing circumstances, will be available for self-employed individuals to cover the period from February 2021 to the end of April.

As part of the package, the government also announced it will extend the temporary 15% VAT cut for the tourism and hospitality sectors to the end of March next year.

In addition, up to half a million businesses who deferred their VAT bills will be given more breathing space through the New Payment Scheme, which gives them the option to pay back in smaller instalments. Rather than paying a lump sum in full at the end March next year, they will be able to make 11 smaller interest-free payments during the 2021-22 financial year.

On top of this, around 11 million self-assessment taxpayers will be able to benefit from a separate additional 12-month extension from HMRC on the “Time to Pay” self-service facility, meaning payments deferred from July 2020, and those due in January 2021, will now not need to be paid until January 2022.

Business that took out a Bounce Back Loan will benefit from the extension of the length of the loan from six years to ten, which will cut monthly repayments by nearly half. Interest-only periods of up to six months and payment holidays will also be available to businesses.

The government will also give Coronavirus Business Interruption Loan Scheme (CBILS) lenders the ability to extend the length of loans from a maximum of six years to ten years if it will help businesses to repay the loan.

In addition, the Chancellor also announced he would be extending applications for the government’s coronavirus loan schemes until the end of November.