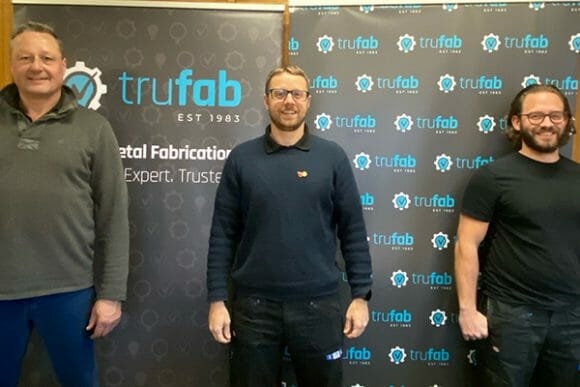 A Rochdale metal fabrications company has made a series of key hires after a well known vehicle manufacturer went into administration.

Trufab, in Fishwick Street, Rochdale, has recruited three former members of staff of Altrincham-based The Cartwright Group, who have nearly 50 years’ experience between them in the coachbuilding industry.

“Jordan, Scott and Andrew bring lots of knowledge about the coachbuilding industry and we can go after a whole new sector of work that we’ve never been able to do before,” said Josh.

“The latest additions bring our workforce up to 72 but our target is to get to over 100 staff. We have 68,000 sq ft and it lends itself to this number.”

Trufab, which launched in 1983, specialises in metal fabrication and the company has invested heavily in the latest technology and engineering innovations to become a market-leader in sheet metal fabrication.

Josh Hickford joined the business as an 18-year-old apprentice and at the age of 27 he is now the general manager. He said: “We fabricate anything out of metal. We take the raw sheet of metal and turn it into virtually anything you want. We work across many sectors including aerospace, pharmaceutical, nuclear and food.”