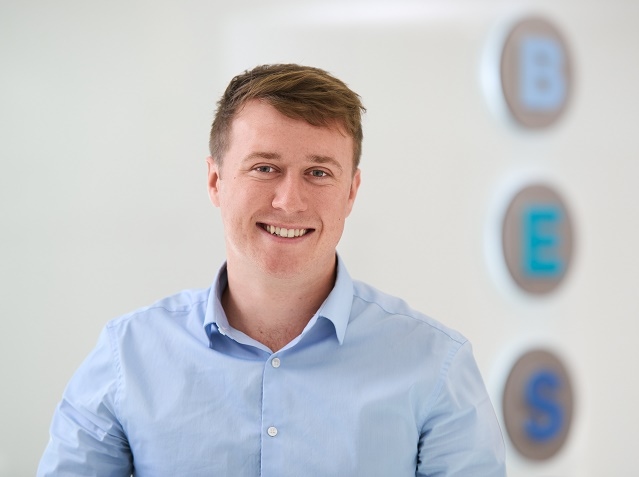 An apprentice from Rochdale-based company, BES Ltd, has achieved a first class honours degree from UCLan (University of Central Lancashire) after his employer enabled him to complete both an HNC and a degree as part of his apprenticeship.

James Robinson joined BES aged just 16 after completing a year at sixth form college and deciding that he wanted to earn as he learned, instead of going down a more traditional academic route.

Following a few weeks’ work experience with the company, which designs, engineers and builds specialist facilities for pharmaceutical, healthcare, research and advanced manufacturing sectors, he was taken on as an apprentice.

For the past six years he has combined his role as a trainee project engineer with his studies and, despite the pressures of working while studying, he has completed his degree with a first class honours and earned himself a promotion.

James’ success is the latest in a long running programme of training and apprenticeships at BES, supporting the company’s commitment to nurturing talent and providing a work environment where employees can progress their careers.

Of the 15 apprentices that have trained within the company over the past 19 years, seven are now in senior role at the company and were funded through their training and degree by BES.

James has now completed his apprenticeship, and BES is continuing to develop in-house skills by developing apprentices, one of whom was recruited during the pandemic as the company has continued to grow.

James commented: “When I first came to BES for some work experience, I never dreamt I’d still be here six years later with a degree under my belt. From the outset, the company has supported me, offered me opportunities to learn from colleagues and take responsibility, and has allowed me to shape my own career goals.

“I love my job as a project engineer and I am so grateful to the colleagues that have mentored me at work and helped me with my studies along the way, and to BES for offering me a route into a career that is both challenging and rewarding.”

James began his career at BES in the company’s design department as an apprentice architectural technologist and completed an HNC in construction and the built environment at Blackburn College. Like all BES apprentices, he was offered the opportunity to work in different departments to aid multi-disciplinary collaboration.

Having enjoyed his time in the engineering department, he switched his focus to becoming a project engineer, studying for his degree in project management within construction at UCLAN. He has also developed his skills and knowledge with a number of additional training courses, including health and safety and various CPD (continuous professional development) programmes.

Steve Marsh, managing director at BES Ltd added: “Training our own talent and offering our employees opportunities to develop their skills and careers is fundamental to our people strategy and to the culture of the business. Ours is a multi-disciplinary team, working in a very technical field of design and construction to deliver mission critical assets for clients.

“From the outset, James has shown himself willing to learn, able to collaborate with colleagues, clients and supply chain partners, and extremely motivated to deliver the high quality standards at the heart of the BES proposition.

“The fact that he has achieved a first class honours degree while also delivering an important role in the workplace testifies to both his hard working approach and the success of our ongoing apprenticeship programme.”