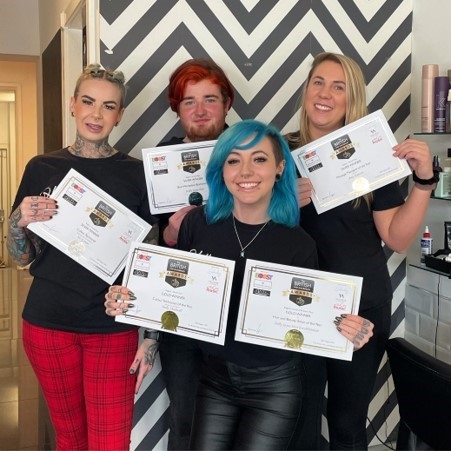 Holly Jayne Hair Establishment in Heywood has once again landed several accolades at this British Hair and Beauty Awards.

The Buttermere Avenue salon achieved gold for the second year running for North West Hair and Beauty Salon of the Year, plus a silver award for Best Workplace Environment.

Holly said: “This is an incredible achievement for us especially after such a turbulent 18 months with lockdowns and working through the pandemic.

“Officially being the ‘best in the North West’ for the second year running is an outstanding achievement for us and we are blown away with our awards this year.

“I am always unbelievably proud of my incredible team and I’m so lucky to work with such talented, inspirational people. The salon has gone from strength to strength even during the pandemic and I am incredibly grateful for so much support from our clients.

“Being recognised for our passion and work is an actual dream come true. We love what we do and we live and breathe our work; we truly have the best jobs in the world.”

Holly opened Holly Jayne Hair Establishment in December 2017, after securing a host of qualifications from Bury College, including Level 2 and Level 3 Hairdressing and Level 2 Barbering.

During her time at Bury College, Holly claimed first place in the North West heat of the Blackpool International Competition, going on to win fourth place in the national finals.

She also took third place in the National Hairdressing Federation competition in the Warrington Bridal Style round, and was shortlisted for the Outstanding BTEC Student of the Year award.

The British Hair and Beauty Awards were established in 2014 by online media marketing company Think Expose. The online awards are considered one of the most prestigious for the hair, beauty, nails and spa industry, recognising those who make a real difference.