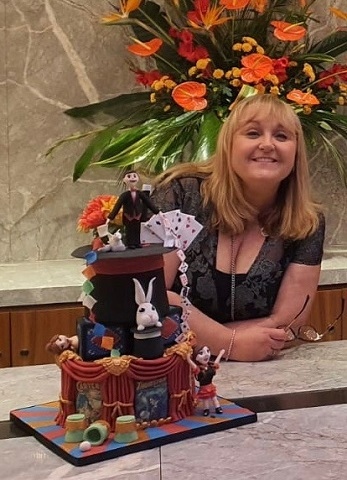 Caketastic Creations, by Johanna Moloney, was one of three businesses shortlisted for Celebration Cake Business of the Year, attending a glitzy awards ceremony in London.

Each business was asked to create a cake representing the magical theme of the Baking Industry Awards with Johanna basing her design around traditional magic tricks.

Her creation featured a pack of cards, a white rabbit peeping out of a top hat, a flower bouquet and wand, plus the illusion of sawing a woman in half.

She said: “It was inspired by the old-time stage magicians from the turn of the century, some of which can be seen around the bottom tier on the original stage posters.

“You’re given a theme, dimensions of the cake and what to use. The other finalists went for a fantasy magic theme. It was great meeting them; I really learned a lot talking to them.”

This year’s Baking Industry Awards is only the second time Johanna has entered a competition, after reaching the semi-finals of the same contest last year.

She hopes to enter again next year, as well as take part in the 2022 annual Cake International event, which is held over three-days in Birmingham.

A former chemist, Johanna began baking after she was made redundant 11 years ago. She went back to college at Hopwood Hall and completed a cake decorating course, attending Wednesday morning sessions at a community centre in Heywood where she “really got into it.”

Johanna began making cakes for family and friends before turning her new hobby into a business. She worked from home for nine years, moving into her Oldham Road premises in August 2019.

Johanna added: “Taking the shop was the best thing I ever did. It’s been a tough couple of years, but I’ve been trying to adapt.”

Caketastic Creations offers celebration cakes, brownies, cupcakes and traybakes as well as cake toppers and a small range of cake decorating items that customers can buy to make cakes at home.

Johanna also runs ‘Queenie the Caravan’, a caravan converted to offer afternoon tea and cake at markets, events and festivals.