You are Here: Home » News » Business News » Well-deserved retirement for Middleton employee after half a century's work

Well-deserved retirement for Middleton employee after half a century's work 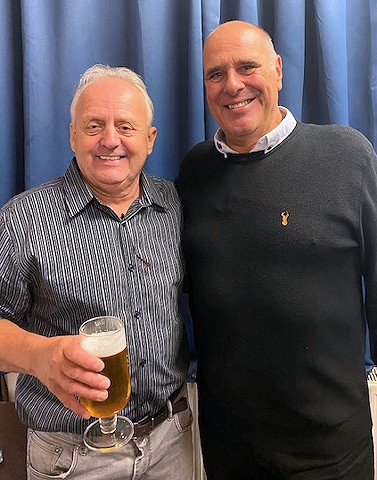 Pete began his career at the plumbing and building maintenance company on 1 April 1971 as an apprentice to Francis Sidney Moult, or Syd as he was known locally, in Middleton, where the business started.

Now ran by Steve Moult, Francis’ son, the business has relocated to Castleton where it continues to offer repairs and maintenance on buildings throughout the borough, mainly for Rochdale Council.

To celebrate Pete’s long-awaited retirement after half a century's work at the business, boss Steve organised drinks and a get together for Pete so that colleagues old and new could raise a glass to him.

Deborah Moult, Steve’s wife, said: “They all had a lovely evening with lots of funny stories shared of things that have happened over the years.

“I spoke to Pete about memorable events and he reminded us that on the night of the Manchester bombing in 1996, it was his birthday, and he was working overtime on the roof of a building in the centre of Manchester.

“When the blast happened, he and his colleague were blown off the roof and onto the scaffolding. Their van was in a cordoned off area and had to stay there for over three weeks.”

She added: “One of the things Steve and his dad always said about Pete is that he was tenacious - if there was a problem he never gave up and always found a way to fix things.

“He has been a wonderful employee, hardworking and conscientious and rarely taking time off. If Pete rings in sick, we worry!”

Pete, who lives in Middleton, is now looking forward to retirement and spending time with family and more time at his caravan near Blackpool. He is particularly excited about the arrival of his first grandchild and being ‘kept very busy with grandad duties’.