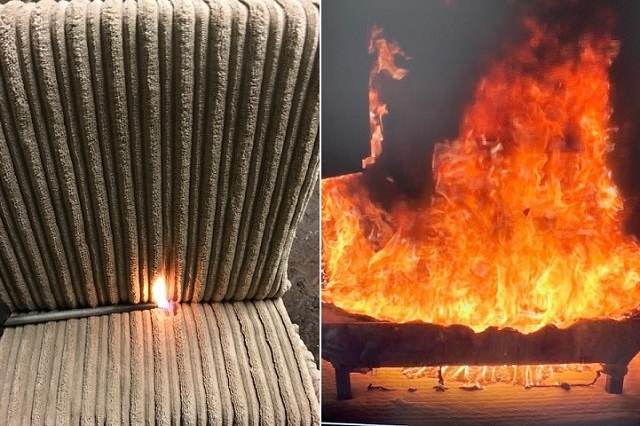 A sofa that has not had a flame retardant treatment and has been subjected to a small flame (right) vs a flame-retardant fabric, resisting ignition from a small source of flame

A Rochdale-based company has created a product that will revolutionise the future of furniture in the UK.

Texchem on Holmes Street has worked together with its parent company in Belgium to develop a new flame-retardant chemical, Addiflam PAC 300, which has been independently certified as the safest and most eco-friendly of its kind.

All furniture in the UK has to pass strict flame retardant standards that were introduced after a Woolworths in Manchester was devastated by a fire in 1979.

Managing Director of Texchem Wayne Aaron confirmed that after five years of working on developing the chemical, it is now being used by major household names in the furniture industry, describing it as a “huge success story for the town.”

He said: “To achieve what we have is the biggest step forward in fire safety and flame-retardant technology since the 1980s.

“We have fantastic research and development labs and we decided we were going to invest a significant amount of time and money in looking at new technologies and creating our own technology, which is exactly what we’ve done.”