You are Here: Home » News » Business News » First signup by housing provider pledges support for Veterans in the run up to Armed Forces Day 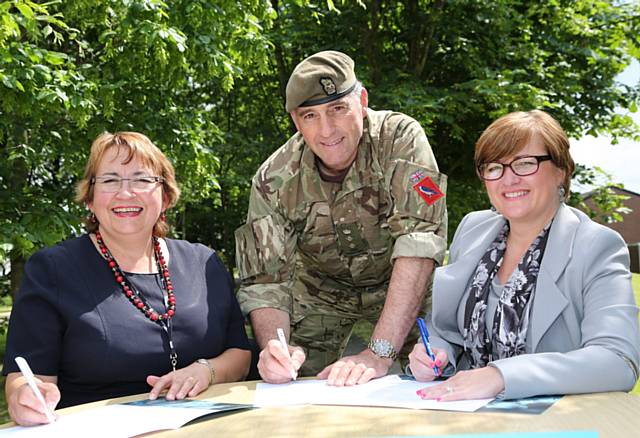 In a landmark development, the award-winning Riverside housing association will be the first civilian housing organisation to sign up to the Armed Forces Corporate Covenant, a national pledge to help ex-Servicemen and women into housing and employment.

The Covenant lists a number of pledges Riverside is making to actively offer Veterans apprenticeships, training and employment within its own company as well as within the broad range of contractors it works with.

The organisation also runs SPACES [Single Persons Accommodation Centre for the ex-Services] SPACES is a project based within The Beacon at Catterick, North Yorkshire. It provides an accommodation placement service for single personnel being discharged from all three services, and has helped 12,000 Veterans into housing to date.

The Covenant builds on Riverside’s ten year track record as a ground breaking provider of support services for Veterans; many of its Veterans services are developed and driven by staff who themselves have served in the Armed Forces.

Carol Matthews, CEO of Riverside, said: “Signing the Covenant reinforces our commitment to helping Veterans back into civilian life. We’ve helped thousands of Veterans in the past few years, and 90% of them go onto independent living. They are the best trained men and women in the world, and are an incredibly valuable asset to the business world at large.”

In 2011 Riverside ECHG was one of the first signatories to the Armed Forces Community Covenant, which took the first important step of setting out the relationship between the nation, the Government and the Armed Forces.

Carol added: “There’s no doubt there is still stigma against Veterans if they have a hole in their CV, or have become homeless. We hope our commitment on Armed Forces Day will encourage others in the business community to also sign up to the Covenant.”

Riverside is one of the leading providers of affordable social housing in the UK, providing over 50,000 homes to nearly 100,000 people, including more than 1,000 Veterans each year. Its services include a national network of support for homeless Veterans with supported social housing centres near Catterick and Aldershot Garrisons and a national housing advice line for ex-Services personnel.