You are Here: Home » News » Business News » Rochdale Council ranked one of the lowest performers on how much they procure from small businesses 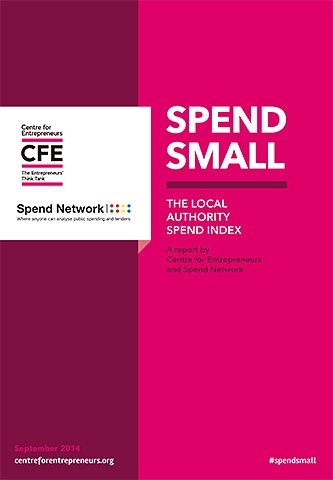 Rochdale Borough Council spends one of the least amounts with small businesses than any other local authority in England and Wales, a new report has revealed.

Spend Small: The Local Authority Spend Index ranks councils on their procurement spend with small companies. According to the report, over the last three years, Rochdale Borough Council spent just 7.69 per cent of its procurement budget with small firms.

These figures compare sharply with the best performing authority – Monmouthshire County Council - which spent 25.6 per cent of its budget with small firms over the same period.

The new research by the Centre for Entrepreneurs think tank and open data company, Spend Network, suggests council procurement from the small business community is a fundamental step towards achieving local economic growth.

According to the report, just twenty large companies earned an astonishing £9.9bn from English and Welsh councils in three years, while 78,128 small firms shared an £11.1bn pot over the same period.

Centre for Entrepreneurs director, Matt Smith said: “The index shows that Rochdale Borough Council has a lot to improve on. This will take time. What’s important is that the council’s leadership commit to boosting small firm spend, and oversee the development and implementation of a Spend Small policy.”

Centre for Entrepreneurs chairman and serial entrepreneur Luke Johnson said: “One of the best ways that government can support small businesses is buying from them. Sadly, many entrepreneurs struggle to win business from government, finding the process to be complex, bureaucratic and tilted in favour of large incumbents.

“Although central government has an explicit strategy to do more business with small firms, the same cannot be said for local authorities, so performance varies widely. Given the opportunity, small, entrepreneurial firms are proving they can cut costs and drive innovation in the public sector, while boosting their local economies.

“The index aims to highlight the best performing councils, encourage those further down the rankings to evaluate their performance, and overall make it easier for entrepreneurs to win business.

“It’s time for all areas of government to Spend Small.”

Rochdale Council had not responded to an invitation to comment at the time of publication.

Electricals retailer, AO.com, is giving Rochdale Online readers the chance to win an Amazon Echo Dot Speaker worth £59.
Advertise your Business for free

If you're looking for new staff, you can advertise a job vacancy with us for 30 days for just £75 +VAT. Use our online form to create your ad.
Local Election 2021