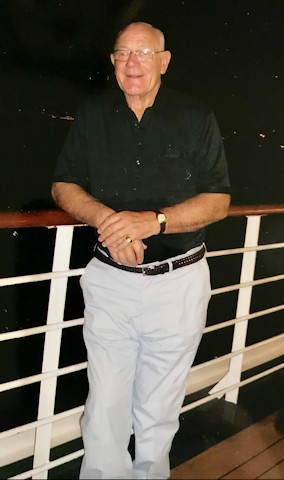 He died peacefully on the sun lounger in his back garden, where he loved to sunbath on a beautiful day.

Geoff was born in Bootle, Liverpool on 21 April 1937. He was bombed out in World War Two, and a four-year-old Geoff moved to Shawforth in 1941 to join relatives.

His father was in the army.

Geoff trained for engineering at Thomas Robinson in Rochdale and used to run in the police sports in 1957/58.

A member of the Y.M.C.A, Geoff was asked to join Spotland Rangers. He also ran with Bury & Radcliffe running club, holding the 100-yard record of 10.1 seconds on their track.

He played a few games for Rochdale Hornets then went on for trials with Swinton, Hornets and Wakefield. He accepted Swinton Lions, signing in 1958-1961.

A bad knee injury in 1961 stopped him playing professionally, so he went back amateur for Spotland Rangers. After his rugby career ended, he travelled all over the world working as an engineer until 1998.

He leaves behind his wife of 58 years, Shirley Maddock, daughters Carolyn Rabaud, Joanne Maddock and Sue Mealyer, and beloved grandchildren, Jessica, Annabel, Samson, Julia, Natalie and Stephanie. He always told his family he never regretted anything he did in his life.

Geoff had always wanted boys for his own little rugby team, nicknaming his daughters and granddaughters ‘Shirl’s Girls’ after his wife. Six years ago, he finally received the boy he wanted in the family with his grandson, Samson.

Geoff’s funeral will take place at 1pm on 2 May at Rochdale Crematorium.