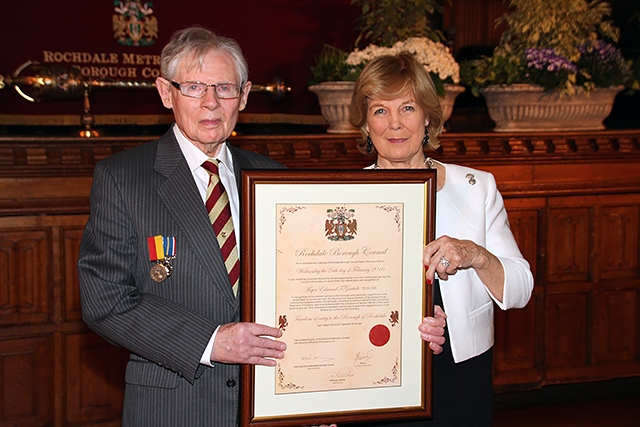 Former President of Rochdale and District Fusilier Association and the Rochdale Royal British Legion, Major Edmund Gartside died peacefully at home on Saturday (14 July) at the age of 84, surrounded by family.

The eldest of three, Major Gartside was born on 11 November 1933 at Crimble Cottage, and lived in Rochdale all his life.

His cousin, Councillor James Gartside, said: “Edmund was a great person to know, and everyone thought very highly of him. He was extremely generous and patient, and no-one had anything unpleasant to say about him. After his firm was taken over, he paid for all past employees and their spouses to have a free dinner.

“Edmund was a very rare character who was involved and well-respected.

“He will be dearly missed.”

Major Gartside was honoured with the ‘Freedom of the Borough’ in 2016, a very rare honour used and is only awarded to residents who have made a significant contribution to the locality or have achieved something outstanding.

As a lifelong resident of Bamford, Major Gartside was nominated for his work developing and promoting the Armed Forces Community Covenant within the borough, as well as his work on behalf of the Fusiliers Association Rochdale and the Royal British Legion Rochdale branch.

Throughout the 1960s, 70s and 80s, Major Gartside, who was educated at Winchester and Trinity College Cambridge, held senior positions on trade bodies including the British Textiles Employers’ Association, the Council of British Cotton Textiles, Eurocoton, and the International Textile Manufacturers’ Federation.

He was also chairman and managing director of Shiloh PLC, a Royton-based company, for nearly 40 years and was also on the Council of the Institute of Directors for many years, and chairman of its Manchester branch.

Major Gartside’s military career began in 1952 with National Service, following in his father’s footsteps, who was awarded medals in both World Ward. He served in the Territorial Service for more than 14 years, rising to rank of Major in the 5th Battalion XX Lancashire Fusiliers (T.A.), becoming Company Commander of B Company in 1957 before becoming Company Commander of 4th East Lancs (LF) in 1967.

He was awarded The Territorial Decoration in 1968 for his services.

He became a member on the board at The Fusilier Museum in Bury until retirement in 2015 and unveiled the Gallipoli Memorial Stone in Rochdale Memorial Gardens that same year.

Major Gartside is survived by his wife Valerie, his children from his first marriage, Michael and Vanessa, six grandchildren and one great-grandchild.

The funeral will take place at 10.45am on Tuesday 31 July at St. Michael’s Church, Bamford.