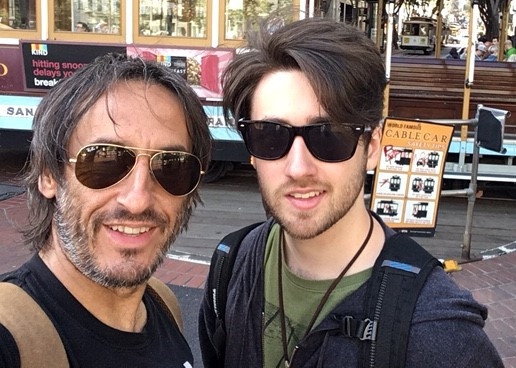 John Katsoulieri with his son, Gabriel

The Willow Tale filmmaker, who was diagnosed with cancer in July 2016, turned his focus to creating music in response to the diagnosis, launching Music Beats Cancer.

He initially underwent chemotherapy at The Christie between September 2016 and February 2017, which reduced his tumour to half the size.

Unfortunately, a second scan revealed the tumour had grown back and also spread, leading to another round of chemotherapy in 2017.

Days after the devasting news, John made the decision to “create as much as I could with my time”, and created a mini symphony, ‘Seconds,’ in response to his feelings about the diagnosis.

John was brought up and educated in the UK before moving to the US in 1996.

He later changed his surname to honour his Greek mother and heritage.

Inspired by this chance meeting, John travelled with his six-year-old son to Kosovo to work with ethnic Serb and Albanian children on a peace project in Mitrovica - the 'Divided City'.

In 2004, and just days after the Asian tsunami, John travelled to Khao Lak in the centre of the disaster zone in Thailand and, with a camera loaned to him by the BBC, he documented his efforts that led him to presenting the Royal Television Society nominated documentary, 'After the Wave'.

He spent most of 2005 travelling between Khao Lak and Manchester continuing to raise funds to directly assist those whose lives were affected by the disaster, providing footage and reports for Channel 4, BBC, ITV and CNN.

With a team of friends and supporters, John established the UK’s first official and public observation of International Peace Day, going on to document the occasion with a film and playing a big part in organising the Rochdale Parade for Peace, which ran until 2010.

Human First, which John founded in 2006, enabled thousands of young people to show what peace meant to them by developing art workshops; the project was the first to be awarded the coveted Inspired by London 2012 mark.

From there, John went on to direct a number of films: ‘And She Cried’, ‘Aelia Laelia’, ‘Waking up On Christmas Morning’ which was recorded live at the Music Beats Cancer event, and ‘Two Souls’, plus music videos for local bands and festivals.

His first feature as a writer and director, ‘And She Cried,’ inspired by the hate crime killing of Sophie Lancaster, was screened at Odeon Cinemas in Rochdale.

Another of his feature length films, based on a true story, ‘Two Souls’, was filmed in Rochdale, telling the story of two women whose lives, independently affected by the Holocaust, brought together by an act of humanity by one man.

‘Aelia Laelia’ was produced for composer Christopher Chaplin, a Swiss-born English composer and actor, who is the youngest son of film comedian Charlie Chaplin, and enjoyed a run of festivals across the world.

‘Aelia Laelia’ received its first Laurel as a finalist at the Mediterranean Film Festival and its first public screening at Film Vault in Manchester.