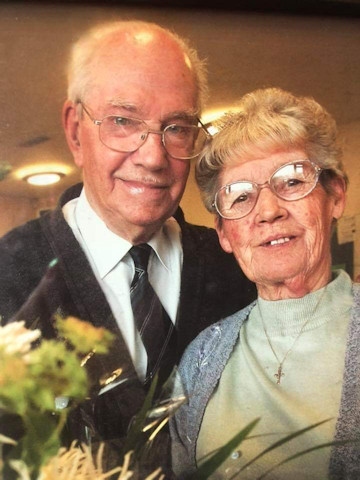 Jack with his wife, Veronica

Jack Ashworth passed away peacefully on 9 October following a long battle with dementia.

After school, Jack trained as a fitting engineer with Whipp & Bourne in Castleton. The early part of his career at Whipp's was through the war years and after work he would go up on to the roof at Whipp's as part of the Home Guard, searching for the German Luftwaffe. He was also briefly a Bevin boy, working down the pit.

Jack later went on to work in engineering at other organisations, including Holroyds and British Vita. He was a Trade Union Rep – experience that would stand him in good stead later when he served the people of Balderstone ward on Rochdale Council.

Jack married the late Veronica in 1948 and they went on to have five children, 12 grandchildren and 16 great-grandchildren.

He spent much of his life helping others in the community, through various voluntary positions such as Manager of Turf Hill junior football team, Chair of Governors at Bishop Henshaw School (now St Cuthbert’s), President of Kirkholt Community Centre, and Chair of Turf Hill Tenants’ Association - to name but a few.

He stood unsuccessfully as a candidate for Rochdale Council five years in a row before finally securing a seat at the sixth attempt. He served on the Council for five years.

Jack lived to the ripe old age of 93 – for the most part, a healthy life and one which should be celebrated. It was only in the last three of four years that his health deteriorated and, following a stroke two-and-a-half years ago, he was diagnosed with vascular dementia.

The family’s thanks go to the staff of Leighton House Nursing Home who cared for him, and for the love and attention they gave him.

The family has asked that any donations in memory of Jack go to Dementia UK.

“Dad was a tremendous person who touched the lives of many, probably more than he realised. We take great comfort that he lives on through his children, grand-children and great grand-children.

“He also lives on in the many memories we created together and the lessons he taught us.”

Jack’s funeral mass takes place at Holy Family Church, Kirkholt, at 9.30am on Friday 2 November. All are welcome.