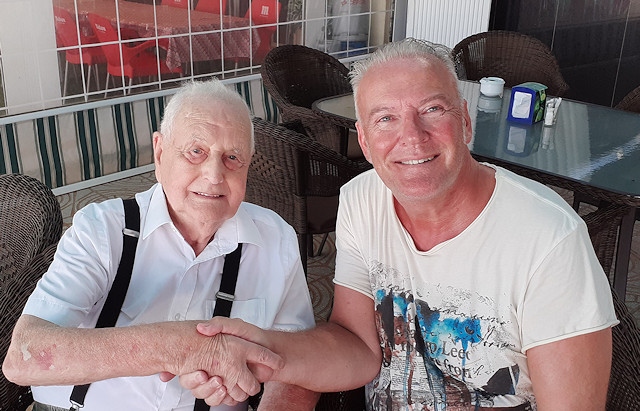 Cecil Leonard Oliver, a Rochdale-born former World War Two veteran known as 'Len', has died at the age of 92, in Torrevieja Hospital in Spain.

Veteran and former RAF mechanic Len died peacefully in his sleep on Sunday 10 November, with his daughter, Susan, and son, Gary, and his daughter-in-law at his bedside in Alicante.

His wife, Kathleen, died of Alzheimer's in 2015, having been married to Len for almost 64 years.

Len and Kathleen married at St Luke's Church in Deeplish going on to have children, Gary and Susan. Gary lives in the UK with his wife, and Susan lives in Spain.

Before emigrating to Spain 30 years ago, Len previously ran a grocery shop on Yorkshire Street, Rochdale, was involved in amateur dramatics, and also taught Sunday School.

He was a loyal member of the RAF Association Costa Blanca charity which supports the RAF family.

Len's funeral took place at Torrevieja Tanatorio on Tuesday 12 November. His coffin was adorned with a flag, marking his RAF service, along with World War Two medals and a photo of him, with a single red rose in situ.

The funeral service included songs 'We'll Meet Again' by Vera Lynn, 'Ave Maria', 'My Darling Kathleen' and ‘Oh, I Do Like to Be Beside the Seaside’.

Len’s biography, March Tenth – named after his wedding anniversary – was published in October by author Andrew Atkinson, who was born in Preston and now also lives in Alicante.

Andrew, who visited Len in hospital and attended his funeral, said: “Len told me his life in Spain had been good. Although he missed his family in the UK dearly, he spoke to members every day on the telephone.

"Len was passionate about life and was a true gentleman. He will be sadly missed.

"Condolences go to his family at this sad time.”