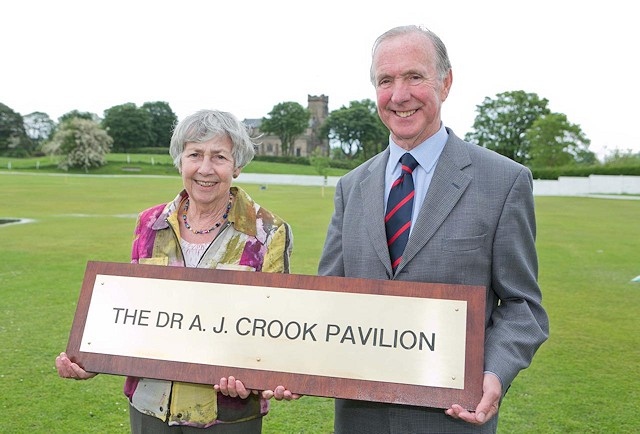 It was with immense sadness that Thornham Cricket Club learned of the death of Doctor A. J. (Tony) Crook, on Tuesday 31 March.

As a committee member at Thornham Cricket Club for more than forty years, as well as, in turn, Treasurer, Secretary, Chairman, President and finally Life Vice-President, Tony made an immeasurable contribution to the club. Having originally joined as a tennis member, Tony graduated to captaining the Second XI in the 70s and 80s. He wrote the history of the club as it marked its centenary in 1968, and co-authored the 150th anniversary edition in 2018, his history of involvement giving him an encyclopaedic knowledge of cricket in the Rochdale and Middleton areas. In those 150 years, surely no individual can have played as great a part as Tony in ensuring the club reached that age in such good health.

The quality of the playing surface at Thornham owes a great deal to the year-round efforts Tony devoted to tending the square and outfield, squeezed into a busy life of professional dedication as a much loved and respected family doctor in Rochdale.

His influence was not limited to Thornham, however, and he served as Chairman of the Lancashire County Cricket League from its inception in 1994 until 2007, after which he was the League President, and also chaired the Lancashire Cricket Board. His prudent leadership and attention to detail made him a most effective leader of both these organisations, and extended his influence in cricket at grass-roots from local to county-wide.

Aside from his stature as a cricket administrator and club trustee, Tony will be remembered as a loyal and dedicated supporter.  He and his dear wife Barbara attended every First XI fixture, with the exception of the two weeks of his annual sailing holiday in Trearddur Bay, where another community will mourn the passing of a much-loved member. It was most appropriate that Thornham named its newly-built changing and tea-room facility the “A. J. Crook Pavilion” in 2014.

Everyone who has played or supported cricket at Thornham Cricket Club over the past 50 years will have their own favourite stories about Tony.  A witty raconteur, he could hold an entire room in rapt attention with anecdotes gathered over his time at the club.

Kevin McMahon, president of Thornham Cricket Club said: "Tony will be missed by each of us at Thornham in ways we cannot even anticipate at this time, but most of all, he will be missed by Barbara, his sons Andrew, John and Stephen and extended family, and our thoughts, prayers and condolences go out to them. To lose such a loved one is tragic at any time, but during a period of such social restriction it is made even more difficult to bear.

"In due course, we will mark Tony's contribution to Thornham Cricket Club in a manner which current conditions prevent, but whatever commemoration is planned, it can scarcely do justice to the debt our little village club owes to a local legend. We will not see his like again."