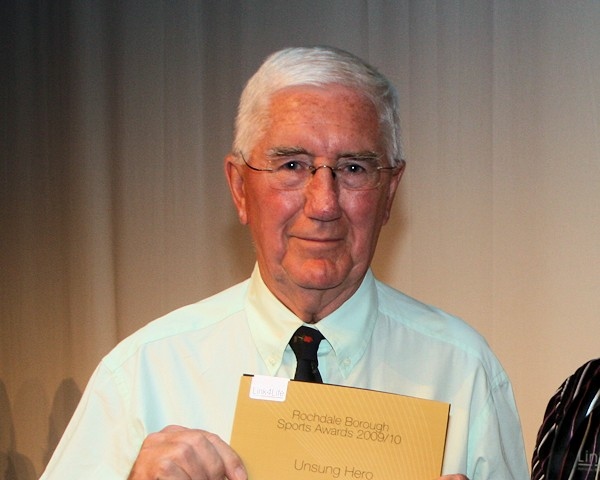 Former Rochdale Mayor and Liberal Democrat councillor, Brian Ashworth has died at the age of 85.

Brian was born in Rochdale and lived most of his life in the Healey area. Born to a strong Methodist and Liberal family (both his parents were Liberals), Brian attended Thrum Hall Methodist Church.

A keen sportsman in his youth, he played both cricket and football for the Social Union of Churches, later becoming an umpire and referee. During his working life, he was a bookkeeper.

He married twice and leaves behind his wife of 48 years Ann, three sons John, Steven and Keith and was a proud grandparent and great grandfather.

In 1982 following the death of Labour councillor Alf Kaufman, Brian was invited to stand as the Liberal candidate in a by-election for Healey Ward, a ward he won and represented until his retirement in 2004. He was Mayor of Rochdale in 1991-92 and was made a Freeman of the Borough in 2004. Brian served as chairman of the board of trustees at Link4Life.

Brian’s other keen interest was music; he was a member of the Rochdale Music Society and loved jazz.

Mr Rowen said: “Brian was a very valued colleague and member of the Liberal Democrat group.

“During our years together on the council either when we were running the council or in opposition, I could always rely on Brian to keep a keen eye on the finances. He was particularly keen on zero based budgeting.

“A great colleague who worked with everyone for the benefit of the borough.”

Councillor Davidson said: “After my election in 1990, Brian was the first member of council who greeted me at the front door of the town hall. He became a good advisor no matter what was asked of him.

Andy King, CEO at Link4Life said: “Everyone at Link4Life is saddened to hear of the recent passing of Brian.   During his time as chair of trustees for Link4Life, he was instrumental in the opening of the three newest leisure centres in the borough and whilst I didn’t work with him directly, all those that knew him and worked with him have fond memories of a true gentleman. Our deepest sympathies are with Brian’s family at this time.”

Councillor Brett said: “A councillor for 23 years until retiring in 2005, Brian’s grace and courtesy will be missed by all those who had the pleasure to know him, work with him and call him a friend.

“I knew Brian well; he was opposition spokesperson when I looked after highways and we sat on many committees together over the years. He had excellent financial knowledge and was extremely thorough with great attention to detail. It was the measure of the true gentlemen he was that Brian always found the time to speak to everyone no matter how busy he was. He had a heart of gold and was committed to representing his Healey ward.

“A keen music fan, I know he cared deeply about the borough that he was proud to call home.”

Because of the current situation, a private funeral service will take place on Monday 27 April whereby only close family members are allowed to attend. However when the situation has eased, a memorial service for Brian will be announced in order that his many friends and colleagues can attend.