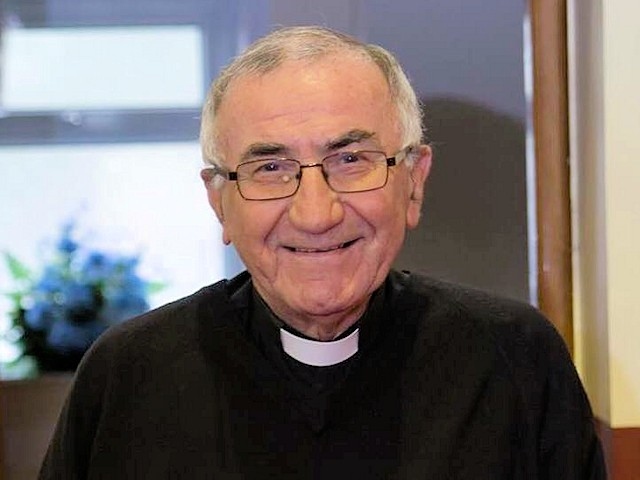 Father Neary was born in May 1946 in Langley, Middleton, where he attended St Mary’s Primary School. He was accepted as an Ecclesiastical student for the Diocese of Salford in June 1957 and attended St Bede’s College, transferring to Ushaw College in September 1964.

Between 1970 and 1985, Father Neary served as an assistant priest in Higher Broughton, Swinton and Pendlebury before moving to Littleborough.

After three years as assistant priest at St Mary’s, Littleborough, he became parish priest from 1988 until his retirement in 2018.

Father Neary continued to reside at St Mary’s presbytery before moving to New Road in Littleborough and then to Nazareth House (care home) in Prestwich in March of this year.

Chairman of the Friends of Our Hospital campaign group, Father Neary was named the 2007 Rochdale Man of the Year, for his work in opposing service closures at Rochdale Infirmary but also for his long term work providing pastoral care for patients and staff at the hospital.

Tributes have poured in for the late priest, describing him as 'a true gentleman', 'amazing', 'a pleasure and a joy' and 'a truly great priest who will be very missed'.

Councillor Ashley Dearnley said: “I was sorry to hear of the death of Father Neary; he was a wonderful parish priest, and was so dedicated to our local health service, where he had been chaplain for many years. RIP Father Neary.”

Former councillor Jean Ashworth said Father Neary was 'a true leader'. In 2010, they delivered a petition to Downing Street, signed by 33,000 residents, opposing the removal of services at the local hospital.

She added: “He fought hard to save our hospital and was a wonderful man.”

There will be a Requiem Mass for Father Neary at St Mary’s, Littleborough, on Wednesday 22 July but, in line with current government guidelines, this will be limited to 30 attendees (family and close friends).

Afterwards, he will be laid to rest in his parents’ grave at Highfield Cemetery, Bredbury.

A Memorial Mass will be held in the future.