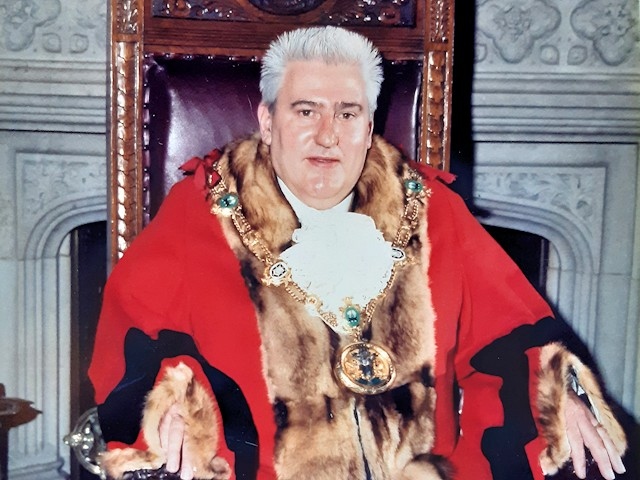 Allan Whitehead pictured in 1987 during his mayoral term

Former Rochdale mayor Allan Whitehead died peacefully in hospital at the age of 82 on 31 July.

He leaves behind wife Marjorie, who was a Justice of the Peace until retiring, nieces Jeanette, Alison and Judith, and their partners and children.

Mr Whitehead was born on 22 December 1937 in Rochdale, living as a child on the Cloverhall Estate. He had two older sisters.

Mr Whitehead was Mayor of Rochdale for the year 1987-1988, and had also been chairman of the planning committee and chairman of the environment and employment committee. He was a Labour Councillor for the Newbold ward (now Kingsway) from 1975 until 1995. After leaving the party, he rejoined Labour in 2017.

In 2016, Mr Whitehead was made Honorary Alderman of the Borough.

Mr Whitehead had worked as an electrical fitter at Whipp and Bourne, Castleton, for almost all of his working life. He was also shop steward and works convener there for the Engineering Union.

A keen swimmer, he took part in many competitions during his youth and swam every day at Rochdale Leisure Centre up until lockdown.

Councillor Brett said: “I was sad to hear of the passing of Allan, who served the borough with distinction both as mayor and, for many years, as a dedicated and hard-working local councillor and chair of planning. He was very proud of his community roots, always championing the cause of the powerless in his drive to help build a fairer, more equal society. My thoughts are with Allan’s family and friends at this difficult time.”

Councillor Farnell said: “I was really saddened to hear of Allan Whitehead’s death. I have known Allan and Marjorie for over 40 years. They were lifelong friends. Allan and Marjorie were the first people I met when I joined the Labour Party.

“I had the great pleasure in serving alongside Allan as councillor for the old Newbold ward. He was a dedicated servant of the people and worked really hard as a community councillor. Nothing was too much trouble for him.

“Allan was the kind of Labour member you don’t see much of these days. A lifelong trade unionist and democratic socialist, he was a no-nonsense councillor who never shied away from telling people what he thought. He was also a very kind and generous man and was firmly rooted in the centre ground of politics. They don’t make them like Allan any more.”

Councillor John Blundell said: “As a younger member joining the Labour Party, Allan was a bit of a legend and everybody knew who he was. I always bumped in to him first thing in the morning when he went for a swim and I was left with a smile on my face as he had an incredible sense of humour. This what he was known for.

"As an ex-mayor of the borough I am certain all of the council will be sad to hear of this and everybody’s thoughts will be with his wife Majorie who everybody has a great deal of time for.”

The funeral will take place on Friday 21 August at Rochdale Crematorium.

Donations to be made, if desired, to Bleakholt Animal Sanctuary.

Get into teaching with Rochdale Training