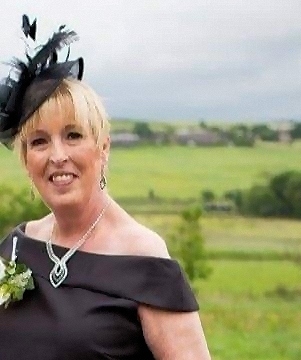 A former police officer, Shelly ran the popular Shelly B’s Café on Drake Street for over a decade, before moving to Royton in 2018 where she continued to run her café.

Shelly was diagnosed with lung cancer in 2019, undergoing vigorous chemotherapy and radiotherapy. Her last session was in December.

Shelly had been married to the late James Buxton for 30 years after 36 years together. They had three children – Steven, who died in 2008, Ryan and Kirsty – as well as three grandchildren, Hannah-Michelle, Kaitlyn and Antonio. James died in 2015 after a short battle with cancer.

Shelly had also led several campaigns, including one to reinstate the Drake Street bus stop after the tramline was introduced, and helped set up an online group for ex-patriots of Rochdale.

She also started a collection for homeless people to visit her café and have food and hot drinks, and adapted an idea from Halifax where people tied clothing to lamp posts for the homeless.

Shelly’s daughter, Kirsty, paid tribute to her mother, saying: “Wherever you met her, I am sure she made a lasting impression. She was a friend to everyone she met, her smile and laugh was infectious, and the café was her heart and soul.

“Our Shelly B’s family has been shaken, and we mourn the loss of our dearest friend, sister and mother. Rest in peace.”

Son-in-law, Mark Petrillo, said: “Shelly was an amazing inspirational woman, strong and caring to everyone. She will be missed by so many and especially me, Kirsty and her grandkids. We love you with all our hearts and we will miss you every day. Spread those wings and fly. James will have been there to greet you with Ste too. We love you Shelly and always will, sleep well. RIP beautiful.”

Her sister, Julie Hadfield, said: “I am so proud my sister made such a huge impact on so many people. It’s true; she was a very special person who touched many people with her kindness and generosity.”

Tributes from many who knew Shelly or frequented her café have poured in from across the borough:

“Shelly had her heart in the right place and will be sadly missed by a lot of people.”

“Such a kind and caring person; a massive loss to us all.”

“A beautiful lady with a heart of gold. A kind soul with a lovely word for everyone. I never heard her say one bad word about anyone.”

“Shelly was such a wonderful, warm and friendly lady and made the café a real focal place where everyone felt at home.”

“Shelly is irreplaceable; a true friend.”