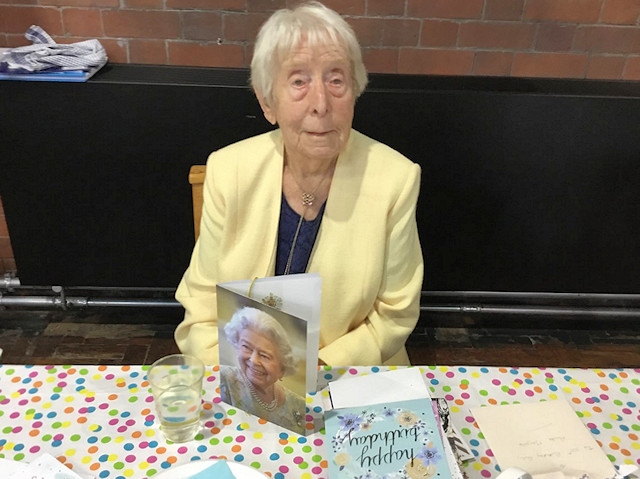 Having enjoyed a full century of work and play, Marjorie proved she is still going strong at her surprise ‘party’ at St Andrew's Church, Dearnley.

A deeply devoted Christian and a regular worshipper at St Andrew's for more than 55 years, Marjorie spent much of her big day at the church with the people who have formed a large part of her long, happy, and socially rich life.

Her family arranged the day, while church officers ensured that Covid-19 protocols were followed - splitting the afternoon into three time slots to comply with the maximum number of people allowed in church at any one time.

Guests on the day included the Bishop of Middleton, the Rt Rev Mark Davies, whom Marjorie has known for many years; the Mayor and Mayoress of Rochdale, Councillor Aasim and Mrs Rifit Rashid; the Rev Rachel Battershell, vicar of St Andrew's; Rev Anne Gilbert, vicar of Rochdale; and some of Marjorie's friends.

The extended family, headed by son Duncan, travelled from many parts of the UK to attend, including Scotland, Cumbria, Suffolk, Warwickshire and, nearer to home, Heywood, Bury and Blackpool.

Marjorie, a former cotton mill girl, was “amazed" at those who turned up to congratulate her and at the amount of work done by her family and the church to lay on the special event.

Speaking on behalf of the family and especially his sister Lesley, 73-year-old son Duncan said: "To live for a full and happy 100 years is a fantastic achievement and I must give credit and pay tribute to our mother for our upbringing and the lifetime of loving care we have been privileged to receive from her and are still receiving.

"I never cease to be amazed at what my mother's generation did all those years ago for the benefit of us 'youngsters' who followed.

"I must also thank the many friends and relatives who have made many complimentary comments and have worked so hard to make mother's celebration an overwhelming success."

Born Marjorie Fenton in Heywood on 26 June 1921, the birthday girl was the elder daughter of Sarah and Harry Fenton, who was well known in Heywood where he used to go round the district with a horse and cart selling groceries.

Marjorie's sister, Marian, was born in 1928 and only recently died at the age of 92.

The family was a tight knit unit, with lots of relatives who all lived in Heywood's Brierley Street district.

In 1943, aged 22, Marjorie married Fred Greenhalgh and they also settled down to live in Brierley Street.

Fred served in the RAF in World War II, posted to many parts of England and also overseas to India, where he became seriously ill with concerns that he wouldn't make it home. Marjorie was assured by a local fortune teller that all would be well, and she was right, Fred returning to health, getting home, and raising a family with Marjorie.

Their daughter Lesley was born in 1946 and Duncan two years later.

Marjorie followed her Aunty Bessie into the cotton mills, progressing to become a weaving-loom tender in which she made towels for the war effort. When the war was over and her children were at school, she started working on school meals, which she did for the rest of her working life.

Eventually, the house in Heywood became too small for four adults and they found a new house in the Dearnley area of Littleborough where Marjorie still lives after 55 years.

Rambling groups, walking holidays, and even caravanning became a large part of Marjorie and Fred's married life, as did St Andrew's, Dearnley once they had moved to that area.

Holiday evenings would often finish, after a ramble, on the dance floor and they would always join in whatever the routine, ranging from the waltz to Scottish Country.

Helping to care for grandchildren Gerard, Simon, Andrew, and Mark was another priority.

After Fred's death in 1992, aged 71, Marjorie still had a full and happy lifestyle, taking several coach holidays and making a lot of new friends in various clubs and groups.

Her knitting skills have now come to the fore as she knits for her great grandchild, Callum, who will carry the Greenhalgh name forward.

Marjorie did not hesitate when asked if she could give advice to young people who were just starting out on life.

"Yes, I can," she said, "Put your mobiles away and start living!

"As for the secret to a long life, 'keep walking'."

She even felt the Covid-19 pandemic was more of a hardship than World War II, adding: "There weren't many bombs in Heywood, and I didn't have children fighting in France, but I have to say Covid for me has been worse than the war.

"At least during the war, we could get around and visit people. The lockdowns have been awful - and scary."

Talking about her faith, she said: "As a child, I went to York Street Congregational in Heywood. Most children back then were 'sent' to Sunday School by their parents and then, as they got older, went to Sunday morning services.

"When we moved to Dearnley we made a lot of friends through St Andrew's and my association with the church continues to this day despite the pandemic."