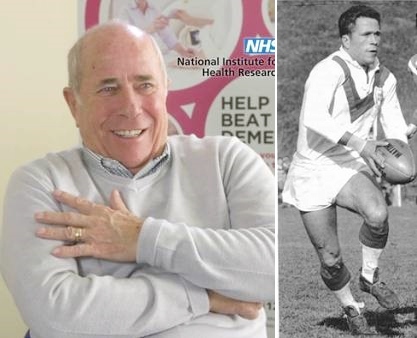 Willie Aspinall, left, and in his heyday, right

Former Rochdale Hornets player Willie Aspinall passed away on Saturday 23 October 2021 at the age of 78, after suffering with dementia for some years.

Willie was a Warrington Wolves Hall of Fame inductee and played for Rochdale Hornets for five years.

He played stand-off, and scored a drop goal in Warrington's 2-2 draw with St. Helens in the 1967 Lancashire County Cup Final during the 1967–68 season at Central Park, Wigan on Saturday 7 October 1967. He did not play (Tony Scahill played stand-off) in Warrington's 10-13 defeat by St. Helens in the cup final replay at Swinton on Saturday 2 December 1967.

Willie played left wing, number 5, in Rochdale Hornets' 16-27 defeat by Warrington in the Player's No.6 Trophy Final during the 1973–74 season at Central Park, Wigan on Saturday 9 February 1974.

“I played in same team as Willie for Lancashire under 16s. Willie was a likeable cheeky chap, a larger than life character who had great skills in rugby league.”

“I crossed swords many times with Willie. I found him to be an exceptionally classy player, always had that big mischievous smile on his face – especially when he was flying past you.

“I thoroughly enjoyed his company at social events and will sadly miss this pleasure. Big Jim sends his personal condolences to Linda and family.”

“Willie was a great addition to the team when he signed for Hornets in September 1971 and played his first match against New Zealand.

“Classy, skilful: you name it, and Willie had got it. He also had this infectious laugh that many a time had the dressing room in total uproar.

“Willie, you will be missed.”