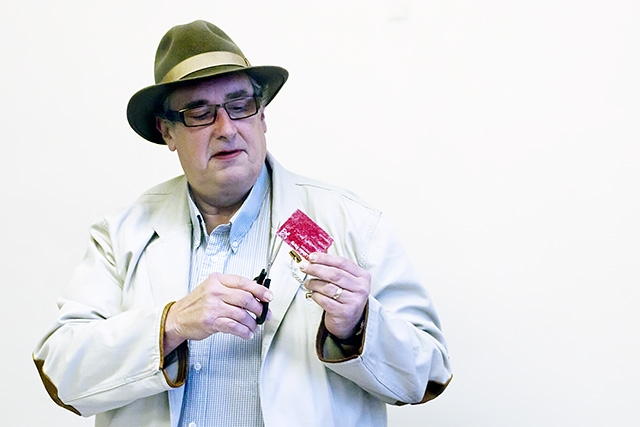 Pete Hinchliffe has died at the age of 64.

Pete, a retired nurse, trade union representative and Rochdale Online reporter, died at the Royal Blackburn Hospital on Sunday (19 April) after a battle with kidney cancer.

Pete was born in Rochdale on 11 September 1950. After working as a nurse for a number of years, he moved to work for the trade union Unison.

In 1987, Pete met his wife Sinead. Sinead was working on the Intensive Care Unit of a hospital and Pete was working on the ward next to the unit. The two began to chat and were encouraged by friends to go out with each other. At the time, Pete wrote poetry and wrote Sinead a note. From that point on, the two stayed together.

Officially their first date was on 1 December 1987. The two were together for five years before getting married in 1992.

Pete lived in Rochdale, Cardiff and London before settling in Rossendale. He moved to London so Sinead could complete midwifery training, however, the couple moved back to Rochdale when Pete’s mum fell ill.

After retiring from full time work, Pete began working for Rochdale Online in 2012 and was described as “the oldest cub reporter in town”. Before officially joining the news team, Pete was an active member and moderator of the former Rochdale Online forum.

Talking about her husband, Sinead said: “He was very good with words. We would often tell him he was being sarcastic but he would say it was irony. He was very well read and into politics, not only nationally but locally as well. He was a very witty man and had a really funny side to him. He was passionate about the NHS and never wanted to see an injustice.

Jean Ashworth, who knew Pete for over 30 years, said: “He was one of the best trade union reps that the Pennine Acute ever had. He definitely kept them on their toes. He was renowned for his time as a trade union rep. He was a people’s man and he always represented the people.

“His sense of humour was unbelievable. I think he was one of the most genuine and nicest people I have ever had the pleasure of meeting and he will be missed an awful lot.”

Angela Coric, a friend of Pete’s, said: “I was saddened to hear the sad news of Pete Hinchliffe’s untimely death and I extend my sincere sympathy to his family.

“Pete used to live with his parents and siblings at the end of my street and he once told me with a chuckle that he remembered me trying to master my new bicycle at the age of six on the cobbles of Suffolk Street!

“Over the past few years, when I caught up with him again via Rochdale Online, we used to reminisce about the old and varied shops on Milkstone Road and Drake Street that are now long gone.

“Pete lived life to the full and was a larger than life figure with an equally large personality.

“He will undoubtedly be missed by all who knew him. I am only sorry that we never managed to have that catch up for the Turkish coffee and vintage plum brandy that I had promised him.

“Rest in peace mate – your star will continue to shine. I will now toast your memory with that plum brandy.”
Simon Danczuk also paid tribute to Pete, he said: "He was a mischievous, witty and refreshing voice and a gentle soul that will be sorely missed."

Pete’s funeral will be held on Monday 27 April at St Mary’s Catholic Church in Haslingden. There will be a mass at 10:45am followed by a short service at Accrington Crematorium at 12:20pm.

If anyone wants to see Pete before the funeral on Monday, he will be in the Chapel of Rest at Holt and Son Funeral Service, Ramsbottom, BLO 9NA, from Friday (24 April). People are welcome to visit and should ring Holt and Son beforehand on 01706 491030 to ensure someone is there.

The family are asking that people don’t spend money on flowers and instead make a donation to Rossendale Hospice or a cancer charity.