You are Here: Home » News » Advertorials » Feast your eyes on this – top chefs and family fun at Rochdale Food and Drink Festival 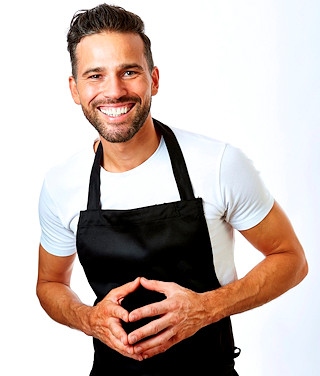 Top chef Dean Edwards will be hosting demonstrations in the festival kitchen.

The region’s foodies are in for another treat when Rochdale Food & Drink Festival is staged on Saturday 16 March in and around Rochdale Town Hall.

Six chefs will be cooking live during the event, staged in partnership with Premier Kia, with eight 40-minute demos packed with tips, techniques and the opportunity to ask questions as well as meet the hosts.

TV chef Dean Edwards and local star foodie Andrew Nutter will be cooking, alongside BBC Fusion chef Aazam Ahmad, as well as a trio of local talent – Austin Hopley from The Baum, Adolfus Lewis from The Hare on the Hill in Littleborough and Noo Meenan from Thai food experts Issan Friends.

A finalist on the BBC’s ‘Masterchef’ back in 2006 Dean Edward’s family friendly cooking style made him a firm favourite on ITV’s ‘Lorraine’. He’s the author of three cookbooks, and on his Twitter and Instagram platforms he regularly shares recipes to his 40,000 followers.

Andrew Nutter will be first up at 11.15am – he’s had an amazing career since coming runner-up in the National Junior Cook of the Year competition aged just 13-years-old. Seven years later he launched ‘Nutters’ Restaurant, which celebrated its 25th anniversary in 2018.

Ever popular Aazam Ahmad is a favourite at top food festivals across the world. Cooking at 1.15pm and 5.15pm, for his second demo he’ll be joined by special guest Noo Meenan - the Thai chef from local street food specialists Issan Friends.

At 4.15pm it’ll be time for Austin Hopley from famous Rochdale pub and eatery The Baum, cooking alongside Adolfus Lewis, chef at the new Hare on the Hill gastro pub in Littleborough.

Over on the indoor Family Stage Mr Bloom from CBeebies will be performing featuring veggie stories, gardening games and catchy nursery songs. Also for families with young children – there will be Shake, Rattle and Roll workshops at 12.15pm and 2.30pm. The sessions were a big hit at last year’s Manchester Food & Drink Festival - kids will get chance to explore instruments, create sounds, sing songs, dance, move, socialise and make a big noise!

The festival kitchen, sponsored by local business Quirky Catering, will be inside the grade one listed town hall along with plenty of stalls and free things to do. There’ll be an outside food and drink village, a series of free themed demonstrations including cocktail making and artisan chocolate making, plus live music from local acts including Katie O’Malley and Joe Dunne.

If you don’t manage to grab a ticket for one of the chef demonstrations there’ll be a free seating area in the Clock Tower Dining Room to watch on big screens and soak up the festival atmosphere!

Budding bakers are invited to enter the festivals annual cake competition. They want you to come up with an idea for a tasty cake designed around the ‘Dippy on tour – a natural history adventure’ theme, a nod to the world famous exhibit that visits Rochdale in 2020 as part of its UK tour. The prehistoric entries will be judged on taste, presentation and creativity and prizes include a champagne experience gourmet dinner for two at Nutters Restaurant.

Councillor Janet Emsley, from organisers Rochdale Borough Council said: “I’m excited by the line-up and I encourage everyone to save the date. We’ll be announcing more attractions and stalls on the run up to the festival as we continue to grow this new event, combining some of the best food elements of Rochdale Feel Good Festival with some new features.”

Rochdale Food and Drink Festival is on Saturday 16 March, open from 11am to 8pm and admission is free.