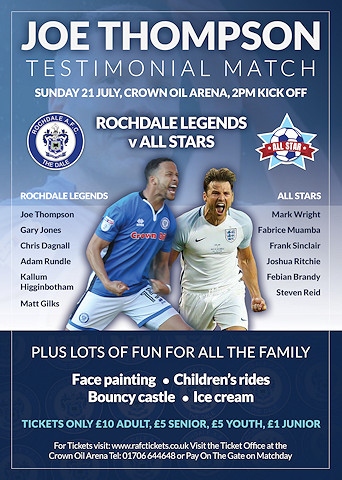 Joe Thompson’s testimonial will raise money for The Christie

Television personality Mark Wright is the latest high profile name to sign up to play in Joe Thompson’s testimonial match on Sunday 21 July 2019 at the Crown Oil Arena (kick off 2pm).

Joe will also be holding a signing session on the day of his testimonial. you can meet the Dale legend in the Ratcliffe Bars at the ground between 11.30am and 12pm.

The day will be full of surprises and celebrations with fair rides, face painting and fun for all the family.

With the game fast approaching, Joe is offering three lucky Dale fans the chance of a lifetime to play in the game alongside a host of other household names and Rochdale legends such as Gary Jones, Chris Dagnall, Matt Gilks and many more. The Celebrity XI already includes former Bolton Wanderers star Fabrice Muamba, ex Chelsea and Leicester City defender Frank Sinclair.

The game is being organised in partnership with the club, Joe himself and former Rochdale CEO James Mason of Five Nine Agency to celebrate Joe’s life as a player and to raise both money and awareness for The Christie. 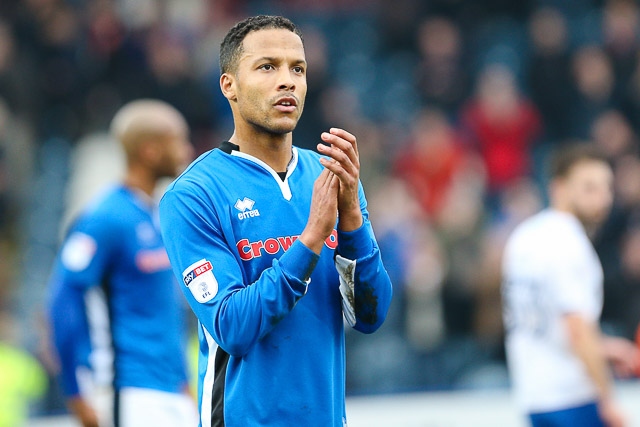 There are three ways to win a place in the game (over 18s only).

Buy a ticket in advance before 17 July to automatically be entered into the draw with the winner chosen at random. The lucky winner will be notified directly. If you have already purchased your ticket, do not worry, your details will be entered automatically (*if you need proof of purchase please contact the club directly).

The Main Stand and Smith Metals Family Stand will be open for the fixture.

Your second option is to film yourself, friend or family member explaining to Joe why you or they deserve to play in the game. That’s right, whether on Twitter, Facebook, Instagram or other, post your video with the hashtag #JoeKicksCancer copying in the following accounts:

You may be Joe’s biggest fan, a life-long Dale supporter or simply want to show off to your friends and family! The best entry will win and the winner notified directly.

If you want to email your entry please send to info@fivenineagency.co.uk

Your third and final option to win this once in a lifetime opportunity is via auction. The highest bidder wins with the closing date again being 17 July.

All you have to do is email your bid to info@fivenineagency.co.uk

So who is confirmed as taking part? The teams are shaping up as below

Join us, we currently meet virtually on Monday nights to chat, catch up with each other and plan where best we can help in the local community. You would be made very welcome. Click here to find out more.
Local Events Listings