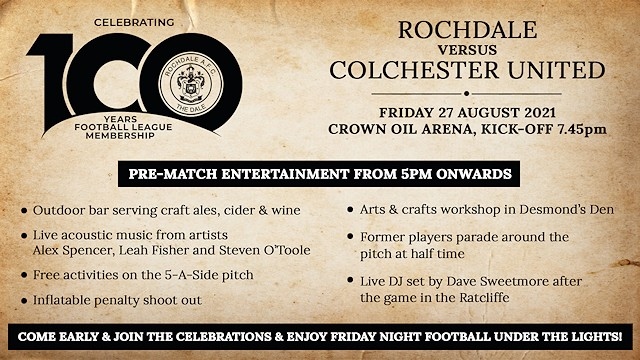 Rochdale's fixture against Colchester United on Friday evening (7.45pm kick off) marks the club’s 100th anniversary as a member of the Football League.

The club are inviting everyone to join them to celebrate the occasion at the Crown Oil Arena for Friday night football under the lights.

There are a host of activities going on before and after the game.

From 5pm, there will be:

After the game, join us in the Ratcliffe Bars for a live DJ set by Dave Sweetmore! Entry is free.

Almost 30 former players have confirmed their attendance at the match, including Keith Hill, Dennis Butler, Gary Jones, Lee McEvily, and Billy Rudd. The players will parade around the pitch at half-time for supporters to show their appreciation.

Our young supporters in the Smith Metals Family Stand can take part in an Arts and Crafts workshop in Desmond’s Den, which will start an hour before kick-off.

Desmond’s Den is located in the Carlsberg Lounge, inside the Smith Metals Family Stand.

Entry to Desmond’s Den/ the Carlsberg Lounge is via the turnstiles only, which open an hour before kick-off.

Tickets for the game are on sale now.

Don’t forget that cash turnstiles are no longer in operation at the Crown Oil Arena - it is barcoded entry only. We urge supporters to use our online ticketing site to purchase their tickets before coming to the ground. Tickets will remain available online until kick-off.

Buying online is the quickest and easiest way buy your match tickets and you can do so by following this link www.rafcshop.co.uk/tickets/match-day-tickets

You can save your e-ticket directly to your phone and scan upon entry to the turnstiles.

Supporters can also purchase in person from the Ticket Office, using either cash or card, in the run up to the game, or on matchday itself. If you plan on buying on the day of the game, please arrive at the ground early and leave plenty of time to visit the Ticket Office.

Celebrate the 100th anniversary of Rochdale AFC's Football League membership in style with a hospitality package.

Book your place by 5pm on Thursday 26 August. You can book online here, or by emailing frances@rochdaleafc.co.uk

Enjoy a three-course meal, VIP treatment and a chance to meet a whole host of former Dale players in our 1907 Lounge before the game, including the likes of Keith Hill, Gary Jones, Shaun Reid, Lee McEvilly, Dennis Butler and Billy Rudd.

Then, take in the match against the U's from the Main Stand before the opportunity to attend the post-match presentations.

A matchday programme, team sheet and half-time cake and refreshments are also included.

There will be limited edition merchandise on sale in the club shop.

A special edition matchday programme will also be available to purchase.

The players will be wearing our third kit for the game.

The third kit is a special anniversary kit to mark the club’s 100th anniversary as a member of the Football League.

The anniversary kit has been replicated on the kit worn by the team 100 years ago and has a retro class elegance with black and white stripes, black shorts and black socks. The only difference being the shorts worn in 1921 were white. The team will wear white shorts for the match against Colchester United. The shirt also features a tone-on-tone badge with special reference to our 100 Years Members of the Football League, 1921 - 2021.

You can purchase yours here.