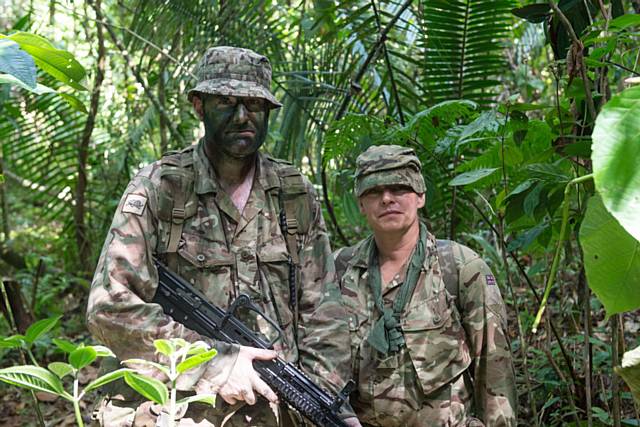 When they jetted off to Belize there was nothing romantic about the trip. Both serve as Army Reservists with the 4th Battalion The Duke of Lancaster’s Regiment and so jumped at the chance to work alongside the Belize Defence Force (BDF) - some of the world’s best tropical warriors.

Corporal Haile, 43, and his partner Lance Corporal Little, 41, both based in Greater Manchester at Bury Army Reserve Centre, are on exercise in Belize with Regular soldiers of the Regiment’s 2nd Battalion who are spending more than a month working in the energy-sapping jungle humidity and temperatures of 30°C.

Corporal Haile, a former full time soldier, now works as an Army recruiter but serves as a reservist in his spare time. He said: “Kim and I met in the Army Reserve so it’s great that she and I can both get away on a training exercise to Belize together.”

They are there with more than 100 others from the 2nd Battalion’s Blenheim Company, learning how to survive and fight in some of the toughest conditions on the planet.

Lance Corporal Little, who works at North West Ambulance Service, said: “I asked to come over on this exercise and then he did too. I think he just wanted to make sure I was OK, but I also get to keep an eye on him too! We get to see each other occasionally, usually after training when everyone meets to freshen up at the river.”

Corporal Haile has served in Bosnia, Afghanistan, Canada and Finland and is in Belize as second in command of his platoon. He said: “I’m in charge of administration – everything from bullets to water, and making sure the lads are just looking after themselves.”

Perhaps the hardest training has been in Sibun Gorge. The location’s holiday brochure natural beauty hides a deadly arsenal of snakes including the giant boa constrictor and the venomous Fer de Lance. The region’s dense vegetation, hilly terrain and still air, thick with humidity, add an extra dimension to the daily tests of survival, navigation and attack.

Exercise Mayan Warrior examined how well personnel adapt to such a demanding environment. Soldiers live in the wild, sleeping in tree-slung hammocks and drinking river water they purify themselves. British Army jungle warfare instructors and soldiers from the Belize Defence Force educate the personnel in how to navigate the lush featureless jungle, move through it undetected and strike enemy positions fast and hard from close quarters.

Lance Corporal Little,, who has also served in Kenya and Italy, said: “My job has been to work with the doctor and deal with patients coming in with minor complaints like earaches and eye problems. But I also get to train alongside them too. It’s amazing to be here working with the Regular soldiers, and get that extra experience of being in the jungle too. But you do miss your home comforts.”

Major Nick Higgins, Officer Commanding Blenheim Company, added: “This whole exercise is designed to be progressive so we’ve been giving the soldiers time to get used to the environment. They’re coping really well. We have some good platoon commanders and section commanders, and that’s important; they make sure everyone looks after their feet and drinks enough water. I can see from the morale of the platoons and how they’re integrating with the instructors and the BDF that, although finding it hard, they are enjoying the challenge.”