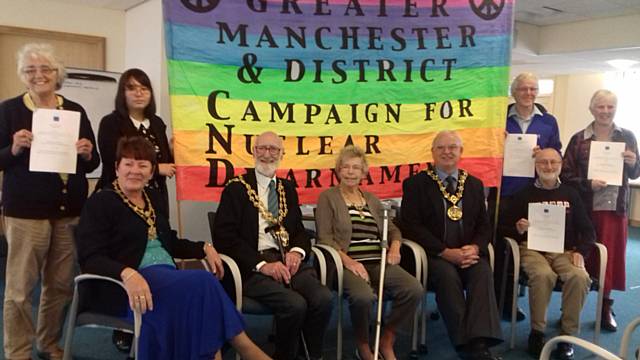 Representatives of Rochdale and Littleborough Peace Group joined other groups from throughout Greater Manchester at the Civic Centre in Oldham on Monday (26 September) to sign the 'Pledge to Peace' (also known as the 'Bruxelles Declaration'), a European project to promote the development of a culture of peace.

Rae Street and Philip Gilligan were guests of the Mayor of Oldham, Councillor Derek Heffernan who became the first mayor in Greater Manchester to sign the Pledge on behalf of his council. He, like Rochdale's mayor, Ray Dutton, who also attended the event, is a member of Mayors for Peace which campaigns for the total abolition of nuclear weapons.

On behalf of the Peace Group, Philip Gilligan said: "We are delighted that both Rochdale and Oldham now have a Mayor for Peace.

"Mayors for Peace is a crucial organisation with more than 7000 city leaders worldwide. Their programme launched by the Mayor of Hiroshima in 1982 promotes much needed solidarity among cities to campaign for a world freed from the threat of nuclear annihilation."

For more information about Pledge to Peace, please see http://www.pledgetopeace.eu

For more information about Mayors for Peace, please see http://www.mayorsforpeace.org