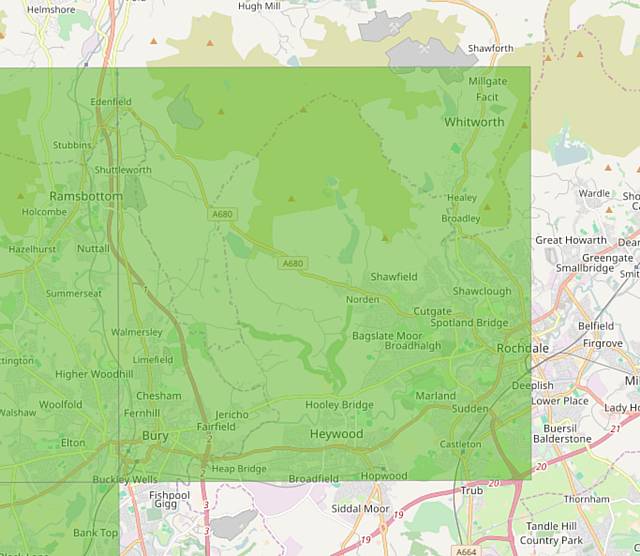 The Oil and Gas Authority (OGA) has offered a Petroleum Exploration and Development Licence (PEDL) to Hutton Energy PLC Ltd and their equity holders, Coronation (Oil and Gas) Ltd, to explore Whitworth, Norden, Heywood, Castleton and the majority of Rochdale - otherwise known as block ‘SD81’.

Block SD81 begins in Shawforth and extends west to Darwen. From Shawforth, the block extends south through Brown Wardle Hill and Syke to the lights at Townhead, before passing through Deeplish and Kirkholt to end near the ring-road of the M62 and the A627.

The block carries west, enclosing Castleton, Heywood and Hopwood before finishing at Bury. Bury to Darwen completes the block.

PEDLs grant exclusivity to the licence owner to allow them explore and extract hydrocarbons (including shale gas). The licence itself does not grant automatic permission for investigative operations.

Planning permission and environmental permits must be given before any drilling, hydraulic fracturing (fracking) or production could take place.

A spokesperson for OGA said: “PEDLs are not specific to shale gas and oil. It does not give any direct permission for operations to begin. The licensee would need to obtain access agreements with the landowner and other permission and consent.

“If fracking was being considered, additional regulatory requirements would apply.”

OGA announced in December 2015 that 159 blocks were offered to successful applicants for the 14th Onshore Oil and Gas Licensing Round. These licenses were granted in July, including SD81.

The license granted for SD81 is PEDL269.

Rochdale Borough Council nor Hutton Energy responded to a request for comment.