You are Here: Home » News » News Headlines » Danczuk caught claiming expenses he was not entitled to claim... again!

Danczuk caught claiming expenses he was not entitled to claim... again! 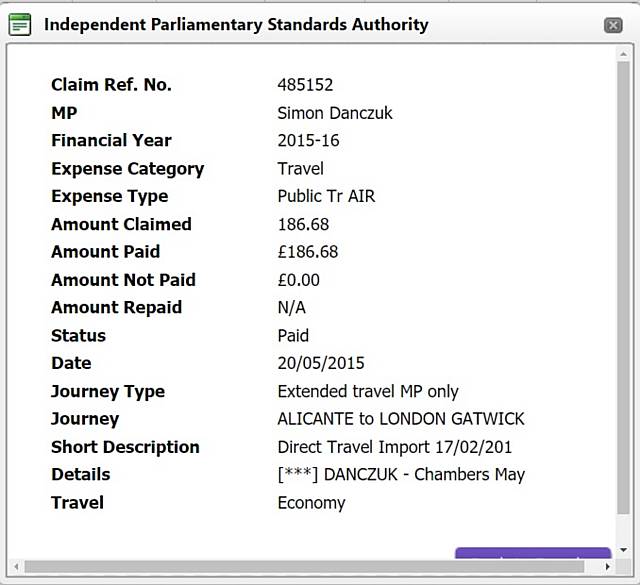 Danczuk wrongly claimed £186.68 for a flight from a family holiday in Alicante

Rochdale MP Simon Danczuk has been caught claiming expenses he was not entitled to claim... again!

Mr Danczuk claimed £186.68 for a flight from a family holiday in Alicante to London Gatwick airport in May 2015 which was not allowable under the MPs’ Scheme of Business Costs and Expenses.

In a statement, the Independent Parliamentary Standards Authority (IPSA) said: "Initial enquiries by the Compliance Officer revealed that the MP had been on holiday in Spain and had booked a flight to the UK to facilitate his attendance at Westminster in order to be sworn in, following his re-election as an MP on 7 May 2015. The Scheme does not provide for such circumstances and the claim was therefore not allowable under the Scheme."

This is the third time Mr Danczuk has been caught claiming expenses he was not entitled to claim, he was previously ordered to repay £96.50 he claimed in car parking costs while on holiday in Spain, and forced to pay back over £11,500 he claimed in accommodation costs for two 'dependant' children who did not "routinely" live with him. Ipsa having concluded "that this was done knowing that there was no reasonable prospect of the children staying at the accommodation", Danczuk is currently being investigated by the Metropolitan Police Service.

Councillor Andy Kelly said: "Well done to Rochdale Online for uncovering this latest in the catalogue of false expenses claims by Simon Danczuk. Had RO not investigated this story and brought it to light, I doubt whether this latest incident would have been uncovered.

"Don’t forget, this is the same person who in 2009 said 'it’s not enough for MPs to say they were ‘within the rules'' and that he was committed to 'high standards of integrity, transparency, accountability and prudence with public money'.

"When ordinary people are caught making false claims for benefits, tax or employee expenses they do not have the luxury of simply paying it back when caught, they are fined, discredited and go to jail. It’s just one set of rules for the ordinary person and another for MPs."

It is understood from IPSA that Mr Danczuk has repaid the money and hence it considers the matter "closed".