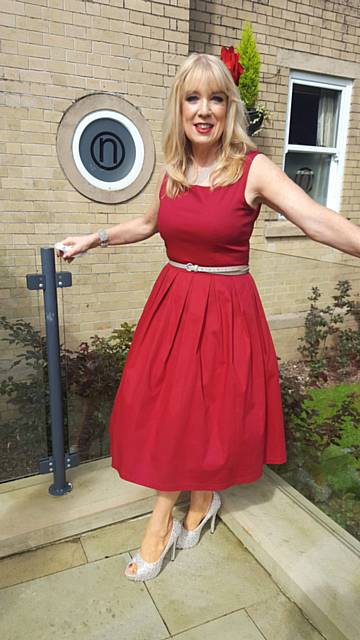 Karen Johnson has won the Special Recognition Pride of Britain Award for her dedication to raising £2.8 million pounds towards research into the degenerative genetic condition, Hunter Syndrome.

Both of Karen’s sons, Simon and Mikey, died from the rare disorder at the age of 12, which is caused by a missing or malfunctioning enzyme in the body.

Simon was diagnosed at 18 months of age when Karen was eight-and-a-half-months pregnant with Mikey.

She was told if her next child was also a boy, there would be a fifty-fifty chance of him also having the same condition.

Karen said: “I knew when I had Mikey that he also had the condition. I was told they would definitely die when they were pre-teens at around five or six years old.”

She was told there was no treatment, no cure and little research into Hunter Syndrome, which sees harmful molecules build up, causing permanent damage affecting appearance, physical abilities and organ functions.

Karen even carried on fundraising when daughter Katie, Karen’s only child without the condition, was diagnosed with leukaemia at the age of four.

Karen added: “At one point, all three of my children were dying.

“When Katie was seven, she relapsed after a cardiac arrest and couldn’t tolerate the chemotherapy any more. She received a bone marrow transplant from Mikey, who was a perfect match for her.

Karen, who lives in Bamford, begin fundraising in 1993, setting up the GEM Appeal charity, which has raised £2.8 million pounds towards equipment and research to date. She started with a raffle, which raised more than £600 pounds and has since held an annual ball every year.

Speaking about her efforts over the years, Karen said: “The local support the GEM Appeal has had from the people of Rochdale has just been outstanding.”

The GEM Appeal (Genetics. Enzymes. Metabolics.) was set up after she was approached by Dr Ed Wraith, a consultant paediatrician who wished to extend the lab where he was researching the condition at Pendlebury Children’s Hospital in Manchester.

“It quickly became apparent a ward was needed, and we raised a further £250,000 and a six-bed unit was built and attached to the Willink unit.”

Although the hospital at Pendlebury has since closed, research has progressed at Manchester Royal Children’s Hospital, where the boys’ names live on at the Simon and Michael Hoather research lab. Research made possible by Karen’s fundraising has allowed new treatments, such as enzyme replacement therapy, to be developed.

Enzyme replacement therapy sees patients receive one intravenous infusion each month. Karen says schools and parents are taught to administer the treatment for children, so they don’t always have to go into hospital.

Karen said: “I’m proud to see children receiving this treatment progress. One child, who you’ll see on the show, is the same age my boys were, and he has responded exceptionally well to the treatment.”

Karen was a finalist at last year’s Pride of Britain awards, winning the title ‘Pride of Granada’ before she went on to represent the North West at the awards ceremony in London.

The Pride of Britain Awards are on on ITV on Tuesday 1 November at 8.00pm .